The youngest competitor at the July nationals held at Avantidrome in Cambridge, Tawhiri’s second placing in the scaled male division put him up against men of all ages, some more than twice his age. A young man of few words, Tawhiri’s CrossFit achievement speaks volumes and he credits his parents for supporting him with his training.

It was only four months out from the competition when he discovered Rob and Jula had entered him in the nationals. It was a surprise, he says, but the quietly determined athlete rose to the challenge. Training has been part of his daily life for many years so it wasn’t difficult for Tawhiri to rachet up another gear, hitting the gym twice daily during the week and up to three or four trainings in the weekends.  “He’s made heaps of sacrifices,” Rob says. “He didn’t really get to hang out with his friends,” Jula adds.

The competition incorporates elements of high-intensity interval training, Olympic weightlifting, powerlifting, gymnastics, running, swimming, strongman and other exercises to test the endurance, strength and stamina of the contestants. 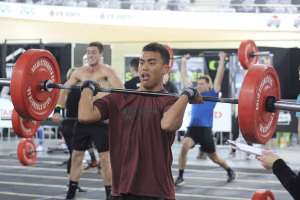 As well as his CrossFit training regime, Tawhiri’s also had the usual schoolwork, work experience with Raglan Excavations and rugby training to keep up with.He also recently qualified in the top 200 14-15 age group out of 1400 other young CrossFit hopefuls from around the world at the CrossFit Games 2018 in the USA.

Competing in the first stage, Tawhiri completed an online five-week, five-workout competition. Aiming to beat his 34th placing next year, he hopes to make it into the top 20 who go on to compete in the finals held in the States every year.