The story of four children who tumble out of a wardrobe into a fantastical world is stunningly retold in the Raglan Theatre Academy’s rendition of Narnia.

The set (constructed by Pete Van Weerden) make this all possible with huge wardrobe doors appearing and first Lucy, and eventually the other three, stumble into the snowy world of Narnia.

Lucy meets Tumnus the faun (Iemaja Hassell), at the lamp-post and follows him home for tea. Despite knowing that the White Witch will find out about the ‘daughter of Eve’ and is likely to punish him severely, Tumnus disobeys her orders, realising he can’t bring himself to give Lucy up to the witch.

Luna is delightful as the spirited Lucy and Iemaja’s portrayal of Tumnus as the confused and frightened faun steals the show.

Josh has a knack for tapping into Edmund’s spoiled nature, and Summer and Connor are suitably serious as the responsible older siblings.

When the four are finally all together in Narnia there are more fantastical creatures to meet – including Mr. Beaver (Griffin Pohutukawka), and his wife Mrs. Beaver (Cassidy Hanna) who are fabulously friendly and helpful, the fox (Annie Fisher) who injects a bit of humour and many more enchanted Narnian creatures.

The siblings learn of the dangerous White Witch, who fears the children are the ‘chosen ones’ sent to defeat her.

Betrayed by the brattish Edmund chasing the promise of sweets, the witch sends her servants to hunt the remaining three children down.

Lucy, Susan and Peter turn to the great lion Aslan – played majestically by Leila-Rose Skeates – and their new Narnian friends, which include talking animals, dryads and fauns, among other fantasy creatures to stop the witch.

Chased by the White Witch’s secret police captain Maugrim (Isabeau Conjearts who also plays the professor’s housekeeper) and his cronies, in a truly frightening performance that sent shivers through the audience. Peter defeats Maugrim who is brought back to face the White Witch and all hell is unleashed as the witch seeks to destroy the children and Aslan.

The ensuing battle scenes and execution of Alsan adds a real element of heightened anticipation and fear. The creatures in the battle sequences are genuinely creepy.

Designed by Maddie Alexander, the costuming is stunning – from the accurate 1940s clothing of the children, Tumnus’s dapper outfit with faun legs and headpiece, to the regal and cruel White Witch (Sashka Highway) and the charming outfit worn by humorous Mr Fox (Annie Fisher).

The choreography (by director Ruth Hare) is enchanting; the entrance of the White Witch in a carriage drawn by ‘reindeer’ is spellbinding with the addition of Jaime Witters singing You put a Spell on Me which showcases her impressive vocal range. Father Christmas being ushered in by his elves to Bjork’s It’s Oh So Quiet is a crowd favourite.

All-in-all the entire cast put on a spectacular performance, bringing drama, humour, musicality and dance to Raglan with this retelling of the much-loved The Lion, the Witch and the Wardrobe. 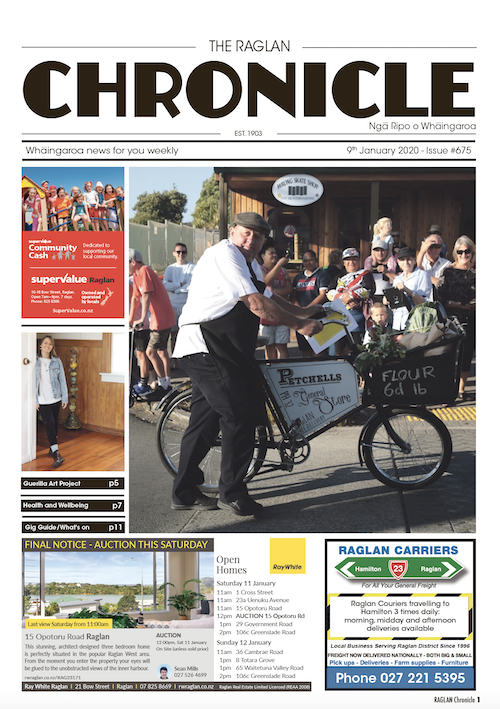 Raglan’s annual Spirit of Christmas exhibition kicked off at the Old School
The new Raglan Community Board was officially sworn in on Wednesday, 13
Accidents and emergencies in rural areas can mean help is often hours
Beautiful sunny Sundays make choosing to spend the day inside discussing how
Taking a step back in time is all in a day’s work
Go to Top