It’s an overcast Monday morning after the holiday madness. Six horses have been plying the main beach from Riria Kereopa Memorial Drive and are now tethered at two horse floats in the car park at the end of the road. A rider is still on the beach exercising one horse while leading another, and two more horses pulling sulkies are being coaxed over the wind-blown sand hump at the beginning of the path through the dunes to the beach. 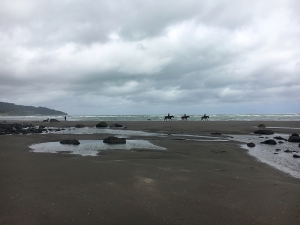 Horse tracks pepper the extent of black sand; so does horse poo.

The bad name that horse owners are getting due to complaints about horse poo makes Surf and Turf Horse Riding owner Petra Berger-Yorke angry. She’s just finished a ride with three horses and they are quietly resting in the car park area.

“I don’t want to be abused and accused of things I haven’t done,” she says, waving her hands over at where other horse owners had strewn a load of horse manure and hay the other day and she had copped the blame.

She says she was approached by a Raglan police officer regarding complaints about the mess and she’s urging all horse owners to clean up after themselves or face the likelihood that horses might end up being banned from the beach.

It will be a big problem if they stop horses from using the beach, Petra says. Horses are behind fences all day and need the space to exercise. “Where else would they go to be ridden?”
Petra says horse owners from out of town leave their horse poo everywhere. She piles hers up in a corner for a gardener to come and collect.

That horse poo bang-smack in the middle of the path to the beach, left by another rider, “I would have cleaned that up!”

But any poo on the beach “gets washed away by the tide” – besides other people leave rubbish and broken bottles in the sand, and dog poo. 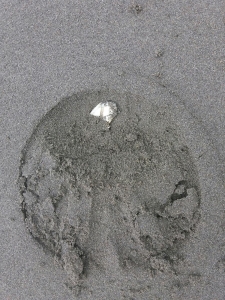 The issue of horses on the beach is contentious. Public opinion ranges from “my dogs eat it” and “I have to clean up after my dog, horse owners should, too” to “my kids step in it and swim in it” and “the poor pipis don’t stand a chance”. Then there is the other side of the fence: “What a bunch of moaners!”

Horse poo is good for dogs, Petra offers, but admits she’s not keen on her dog eating it then sticking his nose in her face.

Raglan Coastal Reserves Advisory Committee chairman Shayne Gold says he hears plenty of complaints about horses on the beach, including from his wife.

Complaints include horse poo on the sand and in the water where people are swimming, horses being ridden in the sand dunes and other areas where they shouldn’t be, or horses throwing riders from their backs after being spooked by dogs.

“They are a big animal. If you are not a horse person it is quite daunting, a horse galloping up to you on the beach.”

Horse riding is permitted along marked tracks in Wainui Reserve but it’s also policy that recreational activities should not compromise the enjoyment of others and have little environmental impact. Dune restoration is a touchy subject, too, as the coastline continues to erode away.

Shayne says the number of horses on the beach is “growing”, along with all the activity in Raglan’s reserves.

“It’s certainly something that we are going to have to address with public pressure. If people keep mistreating the right to ride horses on the beach a bylaw will be created and there won’t be any horses on the beach, like they did with vehicles.”

Shayne says horse riders could always take their horses to Ruapuke, where it isn’t so busy. “Locals aren’t the problem. Some people spoil it for others.”

He expects the problem with horses will rear its head again, and “we will have to sort something out before next summer”.

Whaingaroa Harbour Care manager and Waikato regional councillor Fred Lichtwark says “stock” – which horses are – should not be allowed in the coastal marine environment because they damage the biodiversity. 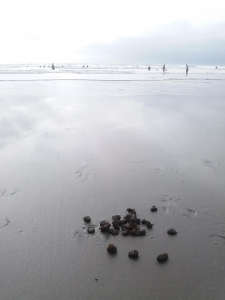 “Environmentally, it is not good practice.

“How many are doing that daily up and down that beach, consistently smashing all the little tuatua and spat that are on the beach?

“It’s all about the weight of the animal and the damage it does to the environment.”

Also, seeing “horses walk on seabed grass is totally inappropriate. You might as well drive a bulldozer over someone’s lawn”.

“In this day and age we have to appreciate the fact that the resources are running out. It’s 2017, it’s time to wake up, not be selfish, use the land for what is appropriate. Horses are not designed to walk on sand dunes and beaches, they live in paddocks and prairies, pasture, not on the beach.”

Fred says the regional council has no policy regarding horses on the beach. “Council has sacrificed our beaches.”

However: “The (Waikato Regional) Coastal Plan is coming up for review. I will look to make rules to protect our resources for the future, be it from a f…ing horse, a bulldozer, whatever.”