He’s only got one leg but Wayne Trott leads an active life.

The Raglan resident has always pushbiked a lot – “it’s a lot easier than walking” on his below the knee prosthetic – and then a few years ago he discovered waka ama.

Wayne says he was always biking along Marine Parade whenever the Raglan waka ama club was going out and one day member Aaron Kereopa said to him “you look like you like to keep fit, want to try paddling?”

So he did and became hooked, competing at regattas around the North Island and at regional and national championships.

This month he was selected for the New Zealand para waka team for the International Va’a Federation (IVF) World Distance Championships in Tahiti in June.

“Paddling is something I can also do for fitness that doesn’t rely on me walking,” says Wayne, who lost his leg in a motorcycle accident about 30 years ago.

Walking on his artificial leg for a long period of time hurts as “the stump is always changing”, and it’s been the “worst year” for walking.

But the part-time sawmiller, who doesn’t like wearing shoes, says he keeps active to keep his sanity, so he can go home at night and feel tired enough to sleep well.

“Most people I know who have a disability do the same.” As a consequence of all that physical activity, he’s worn out a fair number of artificial limbs in his time – “I’ve lost count” – and is currently having a new one built because the old leg “hasn’t been good for about a year”.

“I’ve probably had this one the longest – about two and half to three years.”

Although waka ama is all about paddling, Wayne still needs his artificial limb to help carry the six-man boat to the water and to drive his stroke.

“It’s always better to wear your leg otherwise everything else starts to hurt – your hip, knees, your back goes out.”

The 53-year-old – “you’re never to old they reckon” – gets out on the water about three or four times a week, and “then some”.

He enjoys the peace and quiet out on the harbour, away from the maddening crowds that converge on Raglan, and he likes the camaraderie that comes with being part of a team.

“The boys are a good bunch,” he says of the open men’s Raglan team that he regularly competes and trains with.

“We’re all keen on the same thing: fitness, health … we all have a bit of a competitive streak in us.”

The world distance championship is a new event open to 32 IVF member countries. 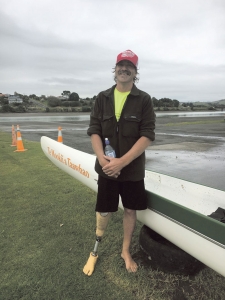 Wayne Trott will be heading to the 2017 World Long Distance Championships in Tahiti in June.

Wayne has competed at national level in “adaptive” waka ama as part of a team of six – the Black Adapts – and in a single outrigger.

In the national adaptive OC1 (single outrigger) competition he won silver in the 500m sprints in 2015 and 2016 but “this year some young buck came along and snaked me”, and Wayne won bronze. That 19-year-old has also been selected to be in the New Zealand para team.

Wayne says his team is a mix of disabilities, including paraplegics who have to be strapped to their seats, an above the knee amputee and possibly a blind woman.

For safety precautions, the boats used in the para races have double outriggers so they can’t flip.

Ahead of the competition, Wayne will attend three training camps, the first during Easter weekend in Napier, and he will continue training with his Raglan team.

He says he’s excited to go to Tahiti and expects the event will be “huge” and “hot”.

“I think it is going to be an awesome experience.”

In anticipation of temperatures likely around 30 degrees Celsius, Wayne says he went for a paddle with his full life jacket on. “It was torture, but I have to try and get used to the heat.”

And he reckons he will have to try his hardest to remain calm so he doesn’t get worn out from all the adrenaline ahead of the big race.

Meanwhile, a Raglan waka ama senior masters women’s team is competing at the Worlds Masters Games, which will be held this year in Auckland in April.

It is the first time that waka ama has been included in the games, which is the world’s largest multisport event and held every four years by a host city.

* A Give A Little page has been set up to support the New Zealand para waka team to compete at the 2017 World Long Distance Championships in Tahiti: https://givealittle.co.nz/cause/nzparawakateam#