It was a mystery why Bush Park Wainui’s Millennium Ponds’ fountains suddenly began to flow again.

The chairman of the Friends of Wainui Bush Reserve was certainly “puzzled”, for it had been agreed to get a solar pump to get water streaming from the fountain again and that hasn’t happened yet.

A group of kids celebrating a 5th birthday party at the reserve a few weeks ago certainly enjoyed it, splashing under the fountain and playing in the water.

But credit is due where credit is due, says Bruce Tresidder, a retired tanker driver who has a bed and breakfast across the road from the bush park.

He says it’s been a long time coming that Raglan resident and old-timer Felix Davy gets the recognition he deserves for not only building the Millennium Ponds and fountain but for helping him to get them flowing again – although it has been a bit of a start-stop situation requiring many hours of standing in the cold and icy Wainui Stream.

Bruce says 88-year-old Felix built the fountains and the ponds, helped hand-plant thousands of native trees and dug out the tracks at the reserve in the 1990s, yet was never invited to the opening ceremony for the Millennium Ponds or publically acknowledged for his work.

“This is to give Felix recognition of that time,” he says, after contacting the Raglan Chronicle to tell the tale.

Bruce discovered Felix’s story after inquiring at The Club who he might contact about the old fountains because they hadn’t been going for some time and he liked to tell his guests to go look at them.

“Someone has gone to a lot of trouble to make this and they were not working!”

The ponds were stagnant and full of mosquitos, he says.

“So I tracked Felix down and we spent the last couple of months getting the fountain going again.”

The fountain draws water from the Wainui Stream. 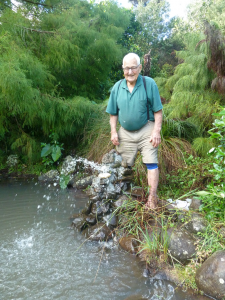 “Felix came and showed me where the pipes were.”

No longer the spry man of his fencing contractor years, Felix struggled through the bush on two bad knees to find them for Bruce.

The pipes and filters were all blocked with silt, says Bruce, who at 68 is not exactly a spring chicken himself.

“It took a week or two before we could get a proper flow going. And then we got the flow going and it was the most amazing sight in the world.”

Felix was so happy, says Bruce – there were tears of happiness in the old man’s eyes.

It had been a long time since Felix last ventured to Bush Park Wainui.

The 10-hectare park area is part of the larger Wainui Reserve and has been planted and tended by Friends of Wainui, founded by Seth Silcock, since 1993.

“It was a shambles,” says Felix of the bush park’s original state. “It was covered in weeds.

“Peter Weiss propagated most of the plants, and when I was there with him we planted 10,000 trees.

“I benched all these tracks out with a spade. I quite enjoyed doing that sort of work and got stuck in.”

Felix says he came up with the idea to build the ponds when Seth asked him if he could do anything with the area.

“Where the ponds are, used to be swamp. We dug the swamp out and made the ponds” using rocks that were found in the surrounding lawn area.

“As fast as they barrowed the rocks over I made this,” says Felix, who intentionally made the ponds shallow so that children would play in them.

He says he loved seeing children play in the ponds again, recently, under the spray of the fountain.

“In its original state, I used to maintain it once a fortnight.

“I made sure you could see the bottom of it.”

He’d scrub out the ponds so that they were nice and clear, he weeded around the rocks and surrounding area, and “trimmed the edges with Seth”.

But after six years of volunteer work to help establish the reserve area – including 600 hours in the year he built the Millennium Ponds – he walked out over a disagreement about planting.

He went back once to have a look at his ponds but told his wife, who died about 10 months ago, “I’m not going back again – it’s an eyesore”. The fountain was dry, the ponds were stagnant and the rocks covered in weeds.

“And then Bruce rang me up.”

“That explains that mystery,” says John Lawson, chairman of Friends of Wainui Bush Reserve, when contacted about the fountain.

John says there is a lot of silt in the stream and over the years the fountain blocked up and stopped working a number of times, and been restarted.

The silt from the water would also collect in the ponds, which then had to be cleaned out every couple of weeks.

He says Friends of Wainui decided it would be better to replace the gravity fed fountain system with a solar pump, and circulate water in the ponds instead of using the water from the stream.

But then all of a sudden the fountain was working again.

“If they can get the current system working – which we have given up on – we welcome that but they seem to be having as much luck with it as we were.”