Eric’s “struggling” with ill health at the moment, says son Denis, and so was unable to get to the ceremony as planned.

Denis and his wife Jennie retired to Raglan from Auckland last Labour Weekend, moving Eric down to the local rest home in Manukau Rd soon after.

But while in taking up residence here Eric’s become almost certainly Raglan’s oldest surviving war veteran, his family say it’s only in the past few years that he’s openly acknowledged his active service in World War II.

War service was something that just wasn’t talked about among the war vets – or their families – at his previous rest home in Auckland, they add.

That all changed when Jennie found Eric’s medals and other war memorabilia then encouraged him to participate in his local St Heliers Anzac Day parades. 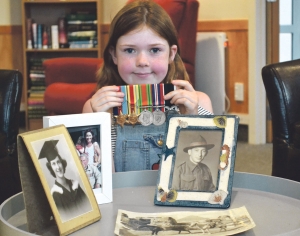 “He couldn’t believe the acknowledgement of the (many) young people at his first parade four years ago,” she says. “And he was amazed at the army presence there.”

She and Denis had hoped Eric could experience something similar downtown in Raglan on Anzac Day, having themselves been to services here over the years while visiting Jennie’s brother, former Games chef de mission Dave Currie.

But with Eric’s health failing it’s now looking like that’s never to be.

As a volunteer worker at Trade Aid, however, Jennie has been able to include in the shop’s current window display downtown some of her father-in-law’s war photos taken in Egypt where he served for four years before a knee injury sent him home.

Also displayed are personal documents including his soldier’s pay book and certificate of discharge.

Eric enlisted for the New Zealand army at the age of 21 and trained for six months before leaving on a ship from Wellington. In Egypt he served in the transport division, driving trucks delivering supplies and also doing guard duty.

After the war he had a successful working life in Auckland, Denis remembers, as a furrier and manager of the Queen Street-based Imperial Fur Company for 40 years. He travelled all over the country showing his ranges of fur capes, stoles, jackets and coats at major department stores of the time.

Eric was happily married for 68 years and is the oldest person in New Zealand’s orthodox Jewish community. He received an award for his involvement in the community from the Governor General a decade ago.