Some Raglan athletes have proven to be international masters at their sports, while others have shown that age or ability is no barrier to playing at world level.

The World Masters Games, a 10-day festival of 28 different sports held this year in New Zealand, finished up on Sunday with a number of Raglan locals winning gold for their endeavours – and a number of locals just enjoying the camaraderie of the competition.

The Games is the world’s largest multisport event, and held every four years.

This year, 28,0000 registered athletes and officials from more than 100 countries took part, with most of the events being held in and around Auckland.

The goal of the World Masters Games is to encourage participation in sport throughout life, and for most of the sports there are no qualification criteria other than age.

All athletes represent themselves and not their country.

Julia Darlington, who competed with crews from Hamilton in the 40-plus women’s and mixed age group, had an intense week of racing to return home tired on Sunday night with her neck weighted in medals.

Jocelyn Hartstone, who is in the Raglan waka ama club, competed in teams made up of mostly of Waitakere and Parehaka paddlers in the 60-plus women’s and mixed divisions.

Jocelyn laughs that there were only two teams in her women’s double hull race.

But in other races “some teams trained really hard and were rewarded for that”.

For waka ama paddler Wayne Trott, who competed in the 500m para V1 and 15km para V1 races and won gold in both, there also wasn’t much competition.

Wayne says in the 15km race there were just himself and a “German guy”, who he beat by 20 minutes, and there was one other Kiwi competitor in the 500m.

“Our times were faster than that of the 50-plus men’s anyway, so we would have got gold and silver,” he says of the 500m sprint.

“We think we came about seventh in the whole world,” says steerer Lynne Rogers.

Lynne says she enjoyed that the races were about inclusiveness regardless of ability and age.

“The whole atmosphere was about looking after each other and cheering each other on.”

A Japanese team entered the waka ama 500m sprints because Japan is hosting the Games in 2021, she says.

“They’d never paddled before, they all paddled on the same side, they came way last and everyone cheered.”

Lynne says it’s nice to be able to learn a sport on Raglan Harbour and take it to a world level. “Can we? Yeah we can!”

Also on the water from Raglan were Tony Oosten and Shaun Stuart-Jones.

The two row with the Hamilton Rowing Club but can also be seen out on the Raglan harbour on calm Sunday mornings.

“As a team we were very happy with our results getting into semis and finals against world-class rowers – in most cases ex Olympic rowers.”

Not in the water this time round was Peter Aim, who at the last New Zealand masters games won five gold medals in swimming.

A bad case of bronchitis kept him out of the pool for the Games so the president of the Raglan Golf Club decided to pick up the clubs instead.

He played three rounds at Akarana, Muriwai and Pakuranga – the courses were extremely tough compared with Raglan, which has just one bunker – and came 24th out of 108 golfers.

“I was pretty pleased,” says Peter, who enjoyed meeting people of different nationalities the most.

Grant, a previous New Zealand mountainbike champion in 1989 and 1990, competed in the men’s 55-59 age group in mountainbiking at Woodhill Forest and finished fifth from a field of more than 40 competitors.

He says it was a good course – but “it was bloody hard on my back” – and he was happy with his result considering he hadn’t really trained for it apart from a few rides around Mt Karioi and the track at Wainui Reserve.

For Lindy Moir, competing in the Games was a big step out of her comfort zone.

The 56-year old played netball in the social “over-40s division” with a team from Australia, The Dugites.

Her sister, Della Cameron, who lives in Perth, talked her into it, even though Lindy hadn’t played netball for over 15 years.

Lindy says she played twilight netball in Raglan over the summer to get her head around the rules and took up running to get fit.

“After strapping injuries, doing warmups, team talks and winning six games out of nine we managed to get to the finals, coming fourth overall out of 15 teams. 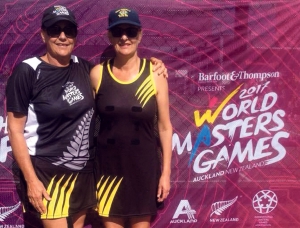 “It was challenging on every level but also so much fun – all with like-minded people.

“A highlight for me was watching some of the ex Silver Ferns play and they certainly displayed some outstanding skills.”

Also playing for an Australian team after a long absence in sport was Donald Cook, who competed in the 50-plus men’s football competition.

Donald says he played for a Balmain, Sydney team in the 50-plus men’s competition, and he was in goal.

“We drew 1-1 with the gold medallists in round play,” he says, and his team made it through to the quarterfinals.

Donald won player of the tournament in his team.