Imagine your surprise when the “dream” guest who’s declined an invitation to your event turns up after all – and from miles away.

“I just came along for the ride,” he told an intrigued audience at the start of the second session as he made an impromptu introduction of one of the guest speakers – his cousin, Haare Williams, a poet, painter, scriptwriter and lyricist whose collaborative book with photographer Michael Krzanich has made waves overseas.

“I had nothing to do at five o’clock this morning,” Witi elaborated on his about-turn. “Also my daughter and her child, my mokopuna, are considering living here so I thought I’d suss you all out and see if it (Raglan) is okay.”

The 73 year old said he was delighted to be in the company of writers, acknowledging the three local authors – Bernadette Gavin, Jacqui McRae and Stephanie Philp – who featured in the morning’s first session about books in the making. 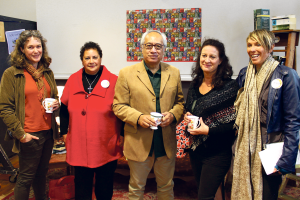 “I wrote my first short story at 11 … when it was raining and we had to stay inside and write,” he reminisced of his school days.

He praised the new photo book, ‘Someone’s Mana’, revealing he’d put Haare and Michael in touch with each other early last year for the collaboration. “Haare is the physical embodiment of mana,” he said.

Witi Ihimaera has many short stories or novels to his name, among them ‘Tangi’, ‘Pounamu, Pounamu’ and ‘The Whale Rider’, the book which spawned the film.

Ironically, even without the drawcard of a household name, Raglan’s third readers and writers festival was bound to be a success in terms of numbers well before the town hall doors opened.

Pre-sales of 60-odd weekend passes were more than triple those at the last event two years ago, revealed local writer Sarah Johnson who was one of seven organisers behind the event. Added to that were the many tickets sold singly for the dozen or so Word Café sessions.

The town hall – the sole Word Café venue – was decorated with bunting made from old book pages, with couches, cushions, throws and beanbags adding an air of intimacy. More formal seating was arranged in a semicircle in front of guest speakers, while drinks and nibbles were provided next door in the supper room.

Iconic Hamilton bookstore Browsers also manned a sales table throughout the event, and noted that people showed renewed interest in buying titles after they had heard “the story behind the story”.

Friday night’s official welcome was followed by a spoken poetry showcase which had some in the audience clicking their fingers in appreciation, then it was back-to-back book talk sessions from Saturday morning through to Sunday afternoon with the announcement of and readings by winners of the writing competition.

Then about 100 packed into the hall for the evening extravaganza with media personality and author Karyn Hay, and poet and short story writer Tracey Slaughter, who entertained and read excerpts from their latest works.

The first saw Latesha Randall and Sebastian Walter – the couple behind Raglan Coconut Yoghurt – answering questions about Latesha’s inspirational guide, ‘The To-Be List’, while the other launch showcased poet and artist Wanda Barker’s novella, ‘All Her Dark Pretty Thoughts’.

“Writing for me is therapeutic,” concluded Wanda after delivering some impassioned readings from her work.  At 66, she reckoned a few grey hairs and grumpiness were a small price to pay for the satisfaction of now having her book published.

“It feels like it (the book) has been with me a long time and now it’s done,” she told her audience.

Facebook posts to Raglan Notice Board were also testimony to the event’s success with Charlotte Pearsall describing the opening night as “epic” and Richard Gemmell impressed at the “fabulous” speakers.

If you missed out, don’t fret, the biennial event will return to Raglan in 2019. For more details visit https://www.wordcaferaglan.co.nz.