Ask Raglan women Jean Carbon and Marie de Jong the high point of their recent trip to Tanzania and both will have the same answer – Kilimanjaro.

Jean at the age of 64 made it to the top of Africa’s highest mountain while Marie, who’s five years her junior, was only an hour off summiting when altitude sickness stopped her in her tracks.

“But I was happy with [reaching] Stella Point,” Marie told the Chronicle. In the final assault at the end of a week’s climbing the pair trekked seven hours through the night – wearing headlamps – to reach the 5756 metre-high point.

While by that stage Marie “needed oxygen”, Jean carried on to Uhuru Peak which – at 5895 metres above sea level – is the highest of  Kilimanjaro’s three volcanic cones.

Pictures in her photo album show a jubilant Jean, arms outstretched, having conquered what is the world’s highest free-standing mountain.

Making it to the ‘roof of Africa’, as Kilimanjaro is dubbed, is just one of several successful climbs to around 6000 metres the unassuming Raglan textile artist and grandmother has accomplished over the years.

“Jean was amazing,” says Marie. “Her body just clicked in.”

She was the oldest in their guided group of seven, one of whom had to be stretchered off the mountain halfway through the trek after a moment’s inattention saw him twist his ankle.

Others who were much younger also suffered the nausea of altitude sickness along the way, Marie adds.

Jean, the coordinator of Raglan’s biennial Art To Wear show, is modest about her achievement and jokes “the dog keeps me fit”.

While she’s trekked a lot at high altitude, including in the Himalayas, she reckons Raglan’s own Mt Karioi is the best training ground and climbed it in preparation for Kilimanjaro until it got so wet underfoot she was risking injury.

The last three weeks before flying out to Tanzania she’d set off with her dog every morning and afternoon from her barn-style home overlooking Ngarunui on a circuit which took in the steep Bryant bush track and a run up the steps to the reserve’s stone sculptures. 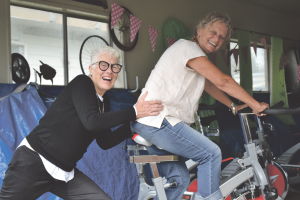 Marie – who with partner Rob Galloway owns Soul Shoes – trained separately but agrees Mt Karioi is “fantastic” for getting into shape. “Everything is at your doorstep here in Raglan,” she says.

From two months before their departure for Africa Marie made sure she did some form of solid exercise each day, whether it was walking the steps of the Bridal Veil Falls and the Hakarimatas or practising at Raglan Yoga Loft and doing spin classes in a Wallis St garage across the road from her home.

She admits she was worried when Jean got the flu and bronchitis before their trip. And despite having trekked the Annapurna Circuit in Nepal as a 22-year old, Marie also had some “what-if” moments during the trek around altitude sickness and the freezing nights when temperatures plummeted to minus 12 degrees.

The pair acclimatised to the thin mountain air gradually while making the ascent, and they’d always walk on with their group a bit further than the overnight camp spot before returning to it.

“You sleep lower than the height you’ve walked to build up oxygen levels in the blood,” Jean explains.

“And you really push your body to the limit,” adds Marie.

The women have nothing but praise for the 20-odd guides and porters who set up kitchens and tents daily and who, they say, want to see their clients get to the top of Kilimanjaro.

“Everyone has to have a guide and a porter – you can’t freedom-walk any more,” says Jean. 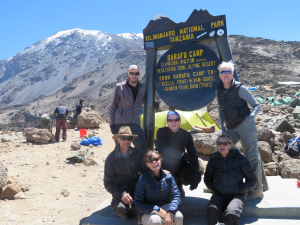 “And they sang to us most days,” Marie adds, replaying a video clip on her smartphone of the tribal dance and song she recorded en route. “They were just gorgeous!”

Marie’s now putting together a movie, perhaps to show at the Raglan Film Festival next year. And Jean’s not finished with altitude climbing yet, mentioning she may well have to satisfy a yen for the heights of Japan.