Parking at Joyce Petchell Memorial Park was the hot topic at June’s Raglan Community Board meeting.

Waikato District Council staff presented two proposed designs, including sealing a large area at Joyce Petchell Memorial Park for 14 angle and four campervan parks and another for alterations to the fire station carpark layout – the parking is part of the museum resource consent conditions.

Board chair Bob MacLeod says the community board have asked the council to go back to the drawing board over the Joyce Petchell proposal and for Stewart Street to also be considered for angle parking.

“Parking at Stewart Street has been discussed since the new museum was built in 2007. We are suggesting to them that they put their money in Stewart Street.”

Waikato District deputy general manager service delivery Roger MacCulloch says they will be talking to archaeological and cultural stakeholders before the Joyce Petchell design is finalised and work starts, as well as addressing potential effects of water run-off from the sealed car park by using rain gardens to help remove pollutants and slow down storm water flows. 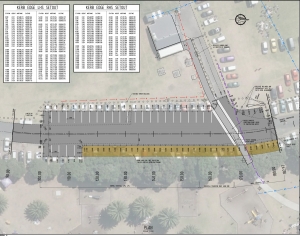 Other recommendations up for consultation include paid – with an exemption for Raglan residents -and angled parking on Bow Street, Wi Neera Street and Wainui Road.

Council recommends a minimum of four machines in Bow Street and two in Wallis Street at a cost of around $10,000 plus a monthly maintenance cost and additional staffing costs to collect the cash.

All proposals are still up for discussion and the board will be holding public workshops, talking to local groups and organisations, as well as opportunities for people with an interest in parking to join the Raglan Naturally transport focus group.

Council will start work on the Papahua/Kopua car park extension soon, which will add 27 car parks with a similar amount of space available in a barked overflow car parking space funded from the parks and reserves budget.

The council are also looking at paid parking for boat trailers at boat ramps with the possibility of a permit for boaties to still use the 48-hour parking at the wharf.

Raglan Sportfishing Club secretary Sheryl Hart says their members were not opposed to user pays but they would only want to pay a reduced fee.

“Raglan Wharf is a working ramp and has been since about 1938. It was put in by the Hartstone family and the Kopua boat ramp was built by the club. When you help build and look after an asset it’s a bit of a joke to have to pay to use it.”

Hart says the wharf has the only ramp that can launch all vessel sizes as Kopua boat ramp has issues with bridge clearance and low tide.

The new Raglan Community Board was officially sworn in on Wednesday, 13
Two community information sessions will be held in Raglan next week to
After public consultation on the future of Raglan’s kerbside foodwaste collection, Waikato
Waikato District Council is supporting a variety of events across the district
The pohutakawa on the corner of Bow St and Norrie Ave caused
Go to Top