Pre-European Māori artefacts are back in the region after years spent in the South Island.

Around 450 taonga, including adze heads and fish hooks, were found when the Mannering family were breaking in the land for farming at Waikaretu in the early 1900s. When the family shifted to Canterbury they took the collection with them.

At the behest of the Mannering descendants, the taonga have been returned to their rightful place with Ngāti Tāhinga during a pōwhiri held at Weraroa Pa on Sunday, paying homage to the ancestors, including Tāhinga, the tribe’s namesake. The artefacts were delivered by Mannering family members to the marae.

“The taonga will stay on the marae until the trustees decide where they will go,” Russell says.

Russell first got wind of the artefacts several months ago when he was called to a meeting with Nga Uri o Tāhinga Trust.

Another meeting was recently held to discuss where the taonga would eventually live and Russell knew it was a perfect opportunity to put Raglan Museum at the forefront.

Arranging for museum president Ken Soanes to attend, Russell was keen for the taonga to stay in the area where they originated and with other taonga, already housed at the Raglan Museum.

“The reason I wanted the taonga to come to the Raglan Museum is we already have close to 2000 Ngāti Tāhinga artefacts from the Bird family collection from Horea in Te Akau and it will be good to keep the collection together.”

“The taonga are an important collection that have been returned to the region of Ngāti Tāhinga. We at the Raglan and District Museum –Te Whare Taonga o Whaingaroa would be proud custodians of these ancient artefacts, and to display them to iwi and our public in a manner in keeping with their importance,” Ken says.

Ngāti Tāhinga are yet to decide if the taonga will reside at the Raglan Museum for safekeeping. They are planning to build a ‘mini museum’ to permanently showcase the taonga at Weraroa.

“I would like to thank Ngāti Māhanga for being involved in returning the taonga to Ngāti Tāhinga,” Russell says. 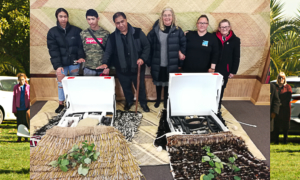 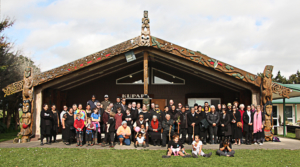