Raglan Four Square really went the extra mile with its third annual Indian Cultural Night last Friday – and it showed in the free buffet dinner enjoyed by an estimated 1000-1500 locals at tables set up in the carpark of the enterprising supermarket.

Until now the massive catering job’s been undertaken close to home by store owner Satnam Bains’ family, but this year the various dishes were put together about 125km or 78 miles away in Takanini, in the kitchens of New Zealand’s largest Sikh temple.

As Auckland Council says on its website, “it’s nothing for the (Takakini temple) kitchens to feed a couple of thousand guests every weekend”.

Raglan Four Square bought the food fresh from the markets then donated $4000-5000 to the temple to turn it into a series of vegetarian dishes – a lentil curry (dahl), a chickpea curry, rice, chapati/roti and a traditional Indian pudding called rice kheer.

Satnam’s mum and other family were there overseeing things and the feast arrived in Raglan by truck about 6.45pm, “still warm” for the 7.30pm smorgasbord.

“Thank God it didn’t rain,” says store manager Andy Singh, particularly as there was a brief shower beforehand.  He thinks that, just to be safe, they’ll have a large marquee or canopy on hand next year.

Entertainment included a live performance by the Bay of Plenty Sports & Cultural Club in which six turbaned Indian men did the bhangra, a traditional Indian dance.

An oversized Mr Four Square man was also dancing the night away in the carpark. Supermarket vouchers were handed out for those best dressed in Indian theme, and Deb King from Xtreme Zero Waste was announced after a live draw as the winner of a family trip to Fiji worth $5000.

Satnam Bains says the annual shindig has a simple objective: “To raise awareness of our culture in the community and to thank the community for their support the whole year.”

Facebook posts on the night were full of praise for the event. “Got to be the coolest Four Square in NZ,” read one message, from Tayla Sowry. 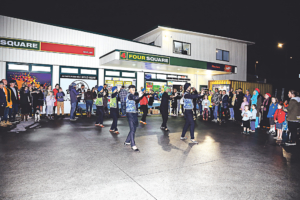 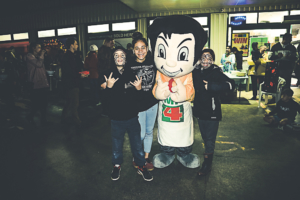 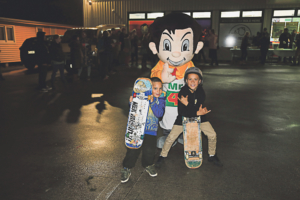 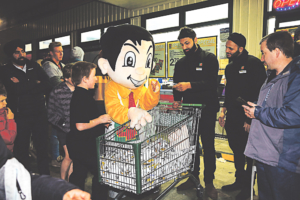