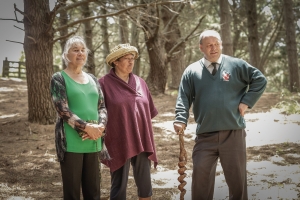 Tainui representative Angeline Greensill cut the ribbon made of tied-together inner bike tubes with a pair of garden loppers following the karakia at the top of the steep hill at the end of Ririra Kereopa Memorial Drive, which marks the entrance of the bike trail in the pine trees.

About 60 people attended the ceremony, including a couple of keen riders from Hamilton who “have been waiting years for this”.

Kaumatua Paddy Kaa blessed the site, “so hopefully no one is going to get hurt“ – it was a bit too late for one sponsor who, helping to break the track in the weekend before, ended up in hospital with a bust collarbone and ribs. A “Caution ride you to your ability” sign has since been erected, marking the steep downhill section with many jumps.

“Hopefully everyone will come along and really enjoy it,” Paddy said of the trail.

“I didn’t enjoy that walk up the hill …

“I cant wait till the day when we come back to open the gondola.”

Kākāriki means green and is the name of the area down on the beach where the steep track to the trail begins.

“We thought that was an appropriate thing, everyone has to start there to get to the bike trail.

“It’s linked into the history of the place, the land … even though the trees are now pine and macrocarpa – they have a Pakeha face to them.”

Sean said the bike trail wound around “significant pa sites of our people”, and there were “many options we could have taken for a name for this place”.

“It took some time to find a suitable name. It had to have a real significance and tie to this land.”

Raglan Mountainbike Club president Merren Tait said the journey to getting the trails built had been a long but rewarding one.

“I am sure that those who will ride the tracks for the first time today will agree that they are a real asset,” she said on Saturday.

Merren acknowledged the support by Tainui hapū of Whaingaroa and the Waikato District Council, especially former Raglan Ward councillor Clint Baddeley, in getting the track built. 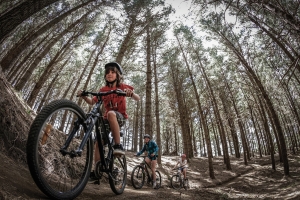 And “we wouldn’t be here today without the passion and drive of two individuals: Charlie (Young) and Dirk (de Ruysscher)”.

Merren said the track builders, Empire of Dirt, were a world-class track-building business “and it is great to see them work with the little guys as well”.

It was a hot, sunny day, but nice and cool under the pines, with a sea breeze coming through to keep riders cool.

The riders lined up to test the tracks, including children as young as 5.

Sienna Hansen, 13, said she would definitely be back.

“It was really good. I liked the Rope A Dope track, there are lots of curving corners.”

Raglan resident Erin Rodgers said it was really nice to see all the kids attend the opening, and to have a “whole new playground for people” in Raglan.

There are about 4 kilometres of trails within the cross-country track system at the council-owned Wainui Reserve.

Dirk, who owns Cyclery Raglan in Bankart St, said the track was a good workout and there had been good feedback from users of all levels – skilled and occasional riders.

“I am sure it will be well used.

“It was quite busy on Sunday, with families coming and going – there was a nice flow of people.”

Dirk and Raglan Ward councillor Lisa Thomson are opening a pop-up cycle hire space next to Rocket-it Kitchen, which should be up and running by next week.

Two-hour rentals will cost $39, including a free coffee from Rock-It.

The Raglan Mountainbike Club is also holding time trial competitions for members on the second Thursday of every month, beginning tonight at 6.30pm at the boardwalk on the track.

Dirk, who is sponsoring monthly prizes given to the fastest man and woman, said each competitor would get two goes around the track for the fastest time.

At the end of the year a trophy will be given to the overall winner.

The entry fee of $2 will go towards the costs of track maintenance.