Competitors either love or hate the Raglan Karioi Trail (RKT) mountain race – much like the steep course, it seems there is no middle ground regarding opinions of the extreme running event.

But a record number of entries this year, many of them return runners, proves that far more people love the epic 24km race that traverses Mt Karioi twice, than swear to “never, ever do that again”.

On Saturday, RKT was held for the fourth year in ideal conditions for competitors: overcast, cool and with scattered showers in the afternoon – although, unfortunately, the mist on the top of the mountain robbed the runners of spectacular views.

Organisers Francois Mazet and Rachel Brown are stoked with the increasing popularity of their race.

“Unbelievable,” says Rachel, of the interest in the toughest race that includes 1850 metres of uphill and downhill through farmland, bush and mud, and involves clambering up and down tree roots, rocks, ladders and chains.

“It just goes to show there are a more than a few loonies out there.”

Francois, a keen skier and trail runner from French Basque Country, says a quarter of the competitors were from Raglan, “which is amazing”, and many international tourists took part, including travellers from Canada, England, Sweden, Italy and France. A couple flew up especially for the race from Dunedin. 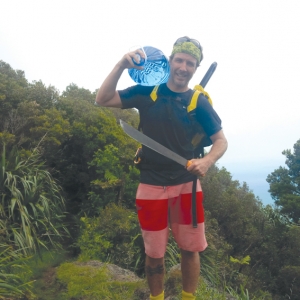 Francois says it is not surprising to get many internationals competing because mountain running is a popular sporting event in Europe, but there were competitors from Raglan who had never even been up Mt Karioi before.

RKT 2016 24km winner Chris Morrisey, from Tauranga, knew what he was getting himself into. He has entered every race so far and it was his third win, finishing in just under three hours, after placing second last year.

Still: “It was not as easy as I thought, halfway through.”

His mate, Dennis De Monchy, who had entered RKT for the first time, was hard on his tail but had to settle for second.

“It was Chris’ terrain,” Dennis says of the second ascent from Karioi Lodge. “I couldn’t catch him.

“It was great fun. I liked the tree rooty, muddy stuff. I smashed out some nice fast kilometres … I will be back. It’s a beautiful race.”

Lina, who was third place-getter overall, says she and her sister do a lot of mountain running at home so there were no surprises about the toughness of the trail. They made it look like easy work.

“It was really fun, up and down all the time, really muddy,” says Lina.

While fun was a common theme of the day, many first-time competitors admitted that they had totally underestimated the track.

One competitor from Auckland announced to his friends on Facebook: “Today I learned that some trail races are predominantly climbing near vertical mud banks on all fours by pulling yourself up by tree roots and branches, that a 1.9km ascent over 24km is pretty steep, and training for it by running on roads is pointless haha (sic).”

Fraser Quin commented on the Raglan Karioi Trail Facebook page: “Thanks for yesterday, team. I underestimated how challenging that course was going to be! I’ll be back next year looking for a better time!”

Sandrine Douarin wrote: “RKT, what an amazing trail! Elevation, mud, rocks … Very technical, enjoyed a lot running even if it was tough and mudddddddddy! Thanks for the fantastic organisation, the sponsors, the volunteers and the supporters! For sure will be back next year.”

Rachel, who competed in the 10km run for the first time this year, says it was nice to experience the race as a runner, “especially the camaraderie”.

“There were loads of people helping each other out, sharing food and water, and keeping spirits buoyed throughout the course.

“It’s getting well known, people are going back and talking about it.

“People are commenting that it is on their bucket list for next year.” 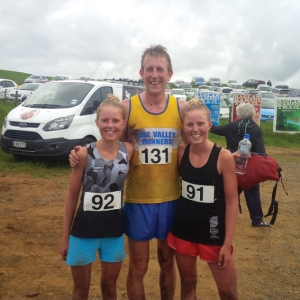