Raglan surfer Billy Stairmand has had a swell start to the year, breaking records by winning his sixth national open men’s surfing title. 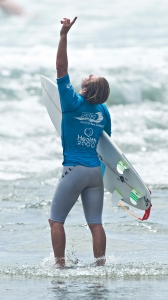 The 27-year-old, who helped Raglan Point Boardriders take out the interclub title with his win, says he’s overwhelmed by his success at the 2017 National Surfing Championships in Piha on Saturday, and it was a good start to the year following the death of his mother.

“Holy crap, that was unreal. That just popped out of nowhere,” says Billy of the win, who had only just recently chucked back on his rashie after a bit of a break from the water.

“At the end of last year I was super busy … my mother died of cancer. I didn’t surf much, trying to hang out with my friends and stay busy and positive.

“Two weeks ago I pulled on a rashie and got out there again and it all came together.

“I had a rough time last year on several fronts so I am hoping that this win is a sign of things to come and I am sure my mum was looking over me on Saturday when I got that first wave.”

Although Billy was aiming to break the 30-year-old record of five national titles, shared with five-times winners Iain Buchanan and Wayne Parkes, he says he was still surprised by the outcome.

“It was pretty fun, the waves were pretty big; Piha is usually really good for swells. It’s good to go to the nationals and hang out with family and friends – everyone from Raglan came up for the last day.”

For his efforts, Billy won a “big cup that we fill up with alcohol”, and which will now have his name engraved on it six times.

“Yeah, that brings back a lot of memories,” says Billy, still in disbelief.

Raglan Point Boardriders surfers made eight finals at the nationals, and took out seven titles.

Kora Cooper claimed Raglan’s first title at the event in the under-14 boys division, and Brie Bennett claimed the first ever title for the under-14 girls division that was introduced this year.

Phil Willoughby won the over-45s’ title; Chris Malone won the over-35 and over-28 titles; and Caleb Cutmore won the under-16 boys’ title.

The combined effort of Raglan’s surfers won them the interclub title – the first time the Point Boardriders have won that at a national level. 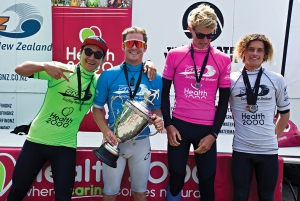 He says the next generation of the Raglan Point Boardriders is “looking really good and all the young grommets are proving themselves”.

Billy is off to the Gold Coast in Australia next week in search of making the qualifying series for the world tour.

“I’ve been trying for about six years,” says Billy, who is feeling optimistic.

“I’ve got more to fight for these days.”