The fifth Raglan Bowl Jam was held last Saturday at the skate park. Drawing local kids and adult skaters as well as some pro’s from out of town, organiser Miles Ratima said it was: “A great day down at the park.”

“We wanted to put on an event for the kids before school started,”said Miles.

“I think it’s also important to raise awareness of skating in our community. It gets quite busy at this park so it would be awesonme if we can get some positive awareness out there to find new locations for another park as well.

“We have a world-class point break here at Manu Bay, imagine if we had a world-class skate park here too that could draw professionals from around the world?” He said.

The Open divisions were both won by  Raglan Surf Co. employees Sandro Viola (mens) and Corina Tweedie (womens) and the Grom division was won by local boy Jack Meek.

During prizegiving Jack gave a sweet shoutout to his friend Esai O’Donnell (who came second) for showing him some new tricks and how sad he was that his friend will be moving to Australia. Esai won the prize for Best Slam and visiting pro Mike Bancroft won the prize for Most Stylish Skater. 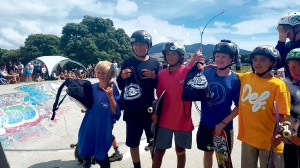 During the first week of April, a street-ball style basketball competition will
The story of four children who tumble out of a wardrobe into
Christmas in the Park is just over a week away, so make
If you need affordable housing, or have any ideas about what you
Raglan Community Radio is set to celebrate 25 years with a birthday
Go to Top