Queenie Tukiri may be 87 next Sunday but there’s little sign of her slowing down when it comes to helping out in the community.

Not that she’s one to talk much about her near lifetime’s labour of love.

“I’ve done a lot of voluntary work most of my life,” is all she’ll admit to the Chronicle in typically understated fashion, not mentioning for example the Queen’s Service Medal she’s picked up along the way for her marathon efforts.

That bit of information came instead from local St John ambulance station manager Bush Barton. “Queenie goes way back (in St John),” he says. “She was one of the originals.”

No sooner had Raglan got its first ambulance in 1975 than Queenie was studying in Hamilton for the nursing certificate which would see her “out on calls” for years to come.

Says local nurse Tracy Frew, who worked alongside her for a time: “She was an active ambulance officer doing whatever was required … and then she was on the committee (as she is to this day).”

Queenie loves being involved in St John Raglan and says that tending the patients – many of whom she knew – was always better than driving the ambulance.

She was also closely tied to Raglan Volunteer Fire Brigade through her late husband Bill, a firefighter for more than 25 years, and as a life member has since become the service’s unofficial ‘mother’.

“We all love her to bits,” fire chief Kevin Holmes was heard to say a few years back at one of the brigade’s annual honours nights when Queenie was busy handing out awards. 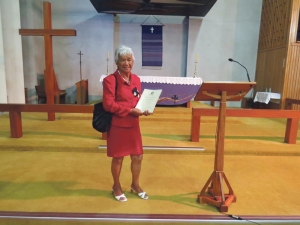 Queenie has also served over the years on the Raglan Club executive, and was on the organising committee of the area school’s 125th anniversary.

She was a pupil at the old school in Stewart Street up until standard four – the equivalent of today’s year six – before moving to what was then the new district high school in Norrie Avenue to complete her primary education.

Queenie reckons she started her lifetime’s work of volunteering soon after that, certainly while still a young single woman. Then came married life and the bringing up of six children, three of whom are still in Raglan while the others have moved across the ditch.

She remains dedicated now to the marae she and Bill, along with the late Eva and Tex Rickard, fundraised for and started up around 1960.

“Queenie is always at Poihakena marae, in a kaumatua or Maori elder role,” says Angeline Greensill, daughter of Tex and Eva.

There Queenie has the back-up or passive role of “being seen”, Angeline explains. And when there’s a tangi on at the marae, for instance, her role is to “keep the place warm”.

“She’s got continuity,” Angeline adds. And if anyone wants to know someone’s background or family history, Queenie is the ‘go to’ person.

She is also still a trustee on the Whaingaroa Ki te Whenua Trust which was set up in the early 80s after the return of land taken by the Government – then used as Raglan’s original golf course – to its Maori owners.

This octogenarian has spent almost her whole life in Raglan, having come across the harbour as a four or five year old from Te Akau where she was born.

Queenie  says “the Maori side of things” – both the marae and the Kokiri Centre – is important to her. She recalls often just sitting with the elderly there, comforting them.

“I love my life in Raglan,” she insists. “I’ve had a bit of everything – the good, the bad and the beautiful times.”