The Yotty has a full line up of international acts from Thursday onwards this week.

Swedish troubadour Jonah Lake will be playing on Thursday. Jonah is a Yot Club favourite with his reggae-influenced sound. Get in early as Jonah’s gigs pack out quickly.

Dubarray are a unique story of an Australian act who kicked off their journey in Europe five years ago, building solid foundations thanks to an abundant and busy live touring schedule.

The band have appeared at many festivals throughout Europe and Australia, such as Splendour in the Grass, Woodford, Wanderlust, Island Vibes and many more, and have supported Tiki Taane on his recent Australian tour. The band is looking forward to bringing its unique uplifting sounds to the Yot Club. This will be a night of high vibes not to be missed. 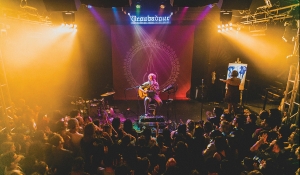 Saturday brings Mike Love to the Yotty. Mike Love is one of reggae music’s rising stars, born and raised in Oahu, Hawaii, to a musical family that spans generations. He brings a multitude of influences to the table, all tied together by the common goal of making the world a better place. Mike Love has shared the stage with artists like Stephen Marley, Don Carlos, Trevor Hall, Nahko & Medicine For The People, John Butler Trio, Groundation, Steel Pulse, Dave Matthews and Jack Johnson.

DJ Dubsonic will be playing with Mike Love. Tickets are available on Eventfinder.

For this weekend’s Sunday Sessions we have a real ripper. For those that have never heard of Norman Jay (MBE), he is unquestionably one of the most respected and popular DJs in the world today. Co-founder of the legendary Good Times Sound System and London dance music station KISS FM, Jay fostered the Rare Groove scene, pushing the boundaries of the UK’s emerging club culture.

Awarded an MBE for services to deejaying and music, he recently compiled his most eclectic compilation to date, Good Times Skank & Boogie, and is currently taking his legendary Good Times party to selected venues around the UK, continuing to convert generations of clubbers to the cause, championing new sounds, yet never forgetting his musical roots – thus guaranteeing nothing but Good Times.

There will be a $10 cover charge from 5pm. We have our normal fantastic food happening and as usual will be going inside at 10pm, where Australian Al Royale will play a three-hour set of funk, soul, disco house.