Celebrated bluesman Midge Marsden is encouraging a big turnout to what could possibly be his last gig in Raglan, the town he once called home for close to 30 years.

Midge Marsden & Band play the Raglan Club on Saturday, Anniversary Weekend, in a year that the diminutive guitarist, harmonica player and singer intends will be the last in his musical career. 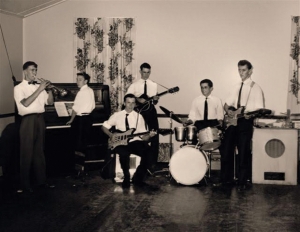 “2017 is going to be my swansong year,” Midge wrote on his Facebook page.

“I’m looking forward to seeing people along to what is quite possibly my last Raglan gig,” he says on the phone from Auckland, where he has lived these past years and where his work as gardener for a retirement village of 900 residents helps keep him agile.

Yes, he knows he said the same thing of 2016, just before he was about to play in Raglan for Anniversary Weekend – and he then also did a gig later in the year for Labour Weekend – but “I wasn’t in a particularly good state of mind” and left it too late to do any long-term planning for a final, farewell and thank you national tour, which is now on the cards for the end of this year and which may include a Raglan gig in early 2018.

It’s common for there to be turmoil and confusion in considering retirement, and for Midge it is probably no exception.

Born Keith Douglas Marsden, he was nicknamed Midget at primary school in New Plymouth, “mainly because I was small and could run like the wind in games like Last Man Over and Bull Rush”, and the name stuck.

Midge started off playing in church halls where people played billiards and drank Fanta – “the 50s and 60s were an astounding time to be growing up, to be a young person coming through that music revolution” – and in his time has introduced several generations of Kiwis to the blues.

He was voted New Zealand Entertainer of the Year in 1990, his 1991 album Burning Rain later went gold, and he was made a Member of the New Zealand Order of Merit for services to music in 2006.

Midge, who played with the legendary Mudsharks at the Harbour View Hotel almost every second Monday night in the 1980s, says: “I think I have had an exceptionally lucky career, I have been around the world, achieved a lot. 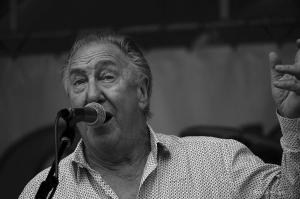 “At my vintage I can still get big crowds.

“The older people say ‘you cant stop because who are we going to go see if you go’, but younger people are going to my gigs, too.”

He doesn’t want to get to that stage where people say, “here comes Midge Marsden, dragging his tired old arse again”, and prefers to bow out while he chooses to, “while I am healthy and able to do it”.

“I would like to go out with some dignity, go out on top.”

Health-wise, he’s all “good now”, although there has been a bit of a scare.

Midge had surgery three days before Christmas to remove a tumour a bit bigger than a golf ball from his head, “that was slightly pushing up my brain, pushing its way behind my ear”.

“That set me back a bit.

“It wasn’t a cancerous thing, but getting bigger and bigger, similar to a sebaceous cyst, I read up on it all.

“I couldn’t turn my head properly … it was a pretty nasty looking thing.

“I am fine now, I am good now; I can turn my head properly.”

So that was stressful, and Midge doesn’t like doing stress.

That’s another reason behind his kind-of retirement: playing gigs, being in charge of it all – the bookings, organising the other musicians – “it’s always a lot of work”.

“I get very nervous about stuff, can’t sleep properly; I’ve got to stop this stuff. I’m just sort of like stressed, really, it’s quite difficult, it takes up too much of my time.”

Yes, he worries, he admits, always has. “I am my mother’s son, I think. I have always been a bit of a worrywart. It’s time to take the stress button off.”

In his downtime, Midge hopes to do more travelling – “Back to Scotland, where my grandparents sailed from back in the day”; elsewhere in England, where family roots also lie; and Malaysia, the food attracts him – and he’s downsizing his possessions.

Midge has more than 8000 LPs and a heap of instruments that he’s starting to sort through.

“Just starting to have less,” he says, and laughs when admitting that perhaps it is about clearing out a heap of stuff so his kids don’t have to contend with it when he’s gone.

“My father died 18 months ago,” he offers, and it took more than three months to “get rid of all his stuff”.

“We were even crawling under the house looking for stuff that we owned when we were 6 years old!”

Midge plans to start his last hurrah tour in October/November.

What that depends on, who only knows!

Midge says Raglan has always been a wonderful place to come back to perform, and “other places don’t have that same magical appeal”.

The Raglan audience is “very loyal” to him, but it seems audiences are wherever he goes.

“I love that stuff, it is cool to have a loyal following,” says Midge.

“I don’t want this to be a boo-hoo sob story, I am just telling you how I am feeling.”

Free Bus (Return from Hamilton) for Midge Marsdon Band this Saturday. Contact cell 0211411247 to Book – Limited seats so tell your friends in Hamilton to book quick. Leaving Hamilton 6.30pm – Back in Hamilton 12.30am