Atrocious weather may have kept the crowd numbers down at the beach this summer but it has also certainly kept the lifeguards on their toes. 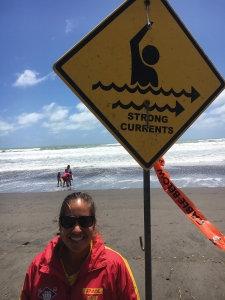 “The weather has had quite a big impact in terms of numbers, but because of the high winds and more storms at sea the surf has been even more dangerous then previous summers,” says Raglan Surf Life Saving Club convener Jess Reilly.

“The lifeguards have had to be on their toes.”

Jess, who organises the club’s weekend volunteer patrols, says there had been quite a few afterhours rescues – one every Saturday for three weekends in a row – where people went swimming right in front of the tower.

“Those afterhours rescues were definitely close-calls,” says Jess, and were similar in circumstances to those that led to the drowning of Cory Edgecombe Lilley in November last year. The 17-year-old was caught in a rip during low tide when no lifeguards were on duty and his body has never been found.

A big trench in front of the surf lifesaving tower has made swimming more dangerous this summer.

Raglan patrol captain Aubrey Shrimpton, who is in charge of the paid regional lifeguard service on the beach from Monday to Friday, says the flags have often had to be shifted as far north as the steps, which “makes our job more difficult”.

“It’s pretty dangerous – the safe area is north of the trench.

“It’s really dangerous at low tide, the water sucks out of it and it creates rips, currents.

“What we are seeing especially this year is we don’t need big crowds to be busy.

“But, honestly, the majority of the people have been good. Most people go and stay with the flags but there is always a handful of people who know better than you.”

Aubrey says all the rescues by the paid lifeguards have been kite surfers at the bar or surfers in Manu and Whale Bay.

“We haven’t had to do any beach rescues.”

On December 29, a group of four people were rescued in a near-drowning incident in Manu Bay.

“Four people were on a bogey board yelling for help,” says Aubrey. “They had washed up on the rocks when we got there.”

She says they had swallowed a lot of water and had been vomiting so an ambulance was called, but because there were a number of them the rescue helicopter was sent out. Two Hamilton men, aged 16 and 47, were flown to Waikato Hospital for further treatment.

Jess says overall there has been an increase in rescues of kite surfers and surfers.

“Even the more experienced surfers are getting into trouble.

“Once you get caught in those rips at the back of Manu Bay you can go for kilometres,” she says.

Raglan Surf Life Saving chairman Dennis Amoore says the club is looking for more volunteers who are keen to get their entry-level certificate to surf lifesaving.

To be a qualified lifeguard you must be 14 years or over and pass a Surf Lifeguard Award exam, which includes a 400m pool swim in under nine minutes, running and swimming in the surf, resuscitation and rescue tests, answering some theory questions and practical surf knowledge.

The Raglan club currently has four patrols of about eight to 10 lifeguards that rotate every weekend. Three Raglan lifeguards have recently gained the advanced lifeguard award.

The last patrol weekend for club volunteers is Easter, with the weekly regional lifeguard service finishing on February 17.