Raglan residents are set to catch a new wave of upgraded bus services from Tuesday next week.

The new buses will be fully air-conditioned, and have free Wi-Fi, USB charging points, bike racks and increased luggage space on board. All buses will also have CCTV for added security. 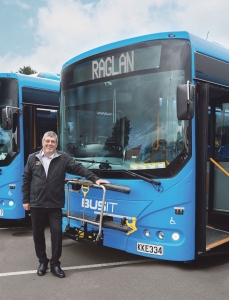 Mayor Allan Sanson outside the Raglan bus. The new bus service will kick off from Tuesday April 18.

The timetable will also be improved, with service now on Sundays and public holidays, and an extra return service on weekdays.

The new weekday service will leave Raglan at 9.30am and return at 12.15pm.

The Sunday and public holiday services will be at the same times as the Saturday timetable.

“It’s great to have worked with the community board, Waikato District Council, New Zealand Transport Agency and Go Bus to get these new operations in place,” said Mr Wilson.

Bob McLeod, chair of the Raglan Community Board said: “We look forward to implementation of upcoming improvements and continuing to work with the regional council to identify and implement further enhancements informed by community feedback.”

Waikato District Council Raglan Ward councillor Lisa Thomson said: “Our community is looking forward to the new bus service for Raglan. The greater capacity, weekend services, new timetable, comfy seating, combined with the ability to have bikes or surfboards on board, will certainly appeal to more people and will hopefully encourage more to use the service.”

The Transport Agency’s Waikato and Bay of Plenty regional director, Parekawhia McLean, said: “We are excited to have worked with our partners at the councils to bring a new level of service to the people.

“We would also like to congratulate Go Bus for coming up with a solution for public transport users that not only shows value for money but also gives these communities a high quality transport option.”

Go Bus said it was delighted to have been awarded the contract to operate buses between Hamilton and Raglan.

“Having operated services in the region for a number of years we’ve got to know the community well and our drivers will be especially happy to have the opportunity to continue getting people to and from these iconic Waikato towns,” Go Bus managing director Calum Haslop said.

“We are also pleased to be introducing brand new EURO 5 low emission buses to the routes, which are equipped with not only USB charging ports, free Wi-Fi and cycle racks, but also coach-style seating and a five camera CCTV system for added passenger safety.”