This year will be the third season that Jack Williamson competes in the NZ Rally Series. Twenty-five-year-old Jack is a local Raglan resident with the Williamson family farming in the Raglan district for many years.

Jack’s journey into rally started when he purchased a classic Toyota Corolla DX (rear wheel drive) rally car. Jack and his friend, Ben, entered a handful of club level hill climbs and sprints in the Corolla and really enjoyed the challenge of the sport. A few rally experts suggested to Jack that he buy a late model front wheel drive car which would really help his driving ability and enable him at a later date to transition into 4WD cars more easily.

And so a 2009 Suzuki Swift car was purchased – this car had been a circuit racing car as part of the Suzuki Cup series. A number of significant modifications were needed to convert the Swift into a rally car, particularly in the areas of suspension and gearbox.

The first season in the Swift was at national level in the all-comers’ category followed by the 2016 season in the NZRC competition. Jack’s mother, Brenda, has the co-driver job and although she only intended to do this for the first season, she is still in the hot seat and loving every minute of it.

Jack’s father, Stephen, is also involved with the rally team; he not only provides assistance in the workshop but is in charge of delivering the rally car to events as far away as Dunedin and is part of the service crew during rallies.

The Williamsons are very proud to be known as the Raglan Team – they had intended to include the rally car in the New Year’s Parade at Raglan however it was (and still is) in the workshop undergoing a major transformation, particularly with the engine and brakes.

Jack completes all the work on the car himself which is very beneficial as it allows the team to control the tight timeframes and financial budgets. His engineering friends, Ben, Brad and Glenn, have also lent a valuable hand along the way.

Jack is currently completing two degrees, mechanical engineering and mechatronics, and prior to that he studied up at the Air NZ Aviation School studying aeronautical engineering. Jack acknowledges that his stringent Air NZ training has been highly beneficial when working on rally cars and this is his point of engineering difference.

This year should be an exciting season for the team – they are hopeful that the car continues its reliable run and that Jack and Brenda keep it on the road. Brenda explains that the sport is a real leveller – “you can be on the road one minute and off the next. Although there have been a few near misses, the Swift has not sustained any panel damage to date, but you are only as good as your last corner”.

In December 2016 Jack was extremely lucky to be invited to attend a special training course with Hayden Paddon and John Kennard at Hyundai Headquarters in Auckland. Hayden Paddon is New Zealand’s top rally driver and a strong contender in the (WRC) World Rally Championship. Jack says “this was an awesome experience to learn from the very best and I was privileged to have been part of it. Hayden and John are inspirational Kiwis who are both at the top of their game and I came away with some great advice”. 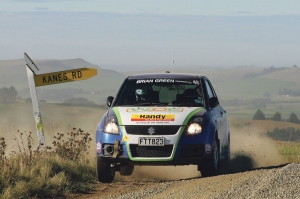 Jack out on stage at the Otago Rally in 2016

This year’s championship kicks off with the Otago Rally this month, followed closely by the Whangarei Rally. For anyone who is interested in following Jack, Chrissport posts live stage results during each rally. While Jack has kept a low profile for the last two seasons while he built up experience, he is now intending to increase the team’s online presence this season by posting on board video footage and has recently started a facebook page “Jack Williamson Motorsport”.

Jack is very grateful for the sponsorship he has received from Handy Rentals, WDE and Automotive Technicians. He is currently looking for additional sponsors for the 2017 season and would love to discuss this with anyone who may be interested. Jack’s contact details are 027 228 4964 or email jack@wde.co.nz.

Jack and his team are counting down the weeks until the Otago Rally and are extremely excited to be heading South again.

The rally dates for the NZ Rally Championship are: