It was so that the then 5-year-old could get to school, no matter what the tide was doing.

Before that Bev’s mother would row across the estuary when the tide was in and “for someone who couldn’t swim this was very daunting”, with two children under the age of 5 seated in the boat.

“She used to tell us, don’t you dare move,” recalls Bev, now 77 and living in Mt Maunganui.

Her dad, Aubrey Butterworth, a farmer on the peninsula, built the bridge in 1944-45 from tea tree felled on their land, which he trimmed with an axe and handsaw and then carted to the beach on the back of his Morris truck nicknamed Gertie. 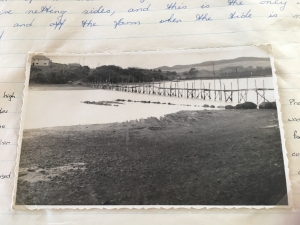 “I remember going to the beach in the truck with the tea tree but how on earth he managed to get the poles dug in the dirt, I don’t know,” says Bev.

This week marks the end of an era with access across the pedestrian footbridge and causeway permanently closed to make way for a new two-lane bridge with footpaths to service the future development of up to 500 properties on the peninsula. In four years it is envisioned that Rangitahi will be a small bustling community – a far cry from the sleepy hideaway that it currently is.

Longtime former Rangitahi resident Neria Mataira, who moved her family of three generations to Waingaro ahead of the closure because “it would have been to o hard to live there while the bridge is being built”, says she feels a huge sense of loss with the changes ahead.

“That was the swimming place of my grandchildren, my children and us growing up. It’s sad to think we don’t know if that will happen again – certainly not in the way we knew it.”

Over the years, the causeway has become a popular swimming spot in Raglan, with kids surfing the strong current in the channel by holding on to rope tied to the bridge.

Bev says the deep swimming hole wasn’t there back in her day – it was created as the causeway was built up, by the force of the water rushing in and out of the estuary under the vehicle bridge.

The first crossing of fascines and stones was put in by the Husband family, who arrived in Raglan about 1900, so they could drive over at low tides in their buggy pulled by two white horses.

Aubrey later built the bridge across the channel, which leads to the causeway, in the year that Bev was born, 1939.

“It made the farm a bit more accessible for vehicles,” says Bev, as the only way across was by boat or walking at low tide.

“Later the access was built up further with a culvert pipe nearer the Opotoru Rd end of the causeway, enabling a few more hours to get vehicles across.”

As more people came to live on the peninsula, the causeway was added to – rocks and rubble material including concrete poles, culverts and bricks – and Frank Chibnall, who owned the farm after the Butterworths, replaced Aubrey’s bridge with a taller one with treated timber and welded steel.

“We’d be up to our knees in water walking across it. And sometimes a board would wash out and you didn’t know, and your leg would go down and get all bruised.”

Bev took her last walk across the current footbridge a couple of months ago, for a trip down memory lane. 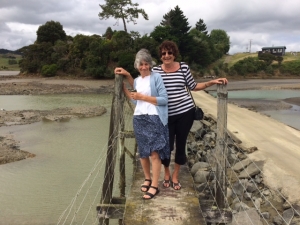 “When I got to the other side and my legs were shaking, and I said ‘I am going to walk back across the causeway’,” she laughs.

The old bridge also always shook back in her day whenever people walked over it, or when Bev and her sister rode their bikes across it.

“We used to laugh at people who would visit and come over the bridge … it was so scary for them. We’d always stomp a bit harder behind them so it would shake a bit more.

“I always remember it as a happy time on the farm, there.”

*  There will be no public access on to the Rangitahi Peninsula over the next 12 months. The causeway officially closed on June 6, while pedestrian access across the footbridge stopped on June 12. The walking and biking tracks on the peninsula farm are also closed until further notice. Construction of the bridge is expected to begin this month.