Raglan lifeguards have taken out two of the top trophies at Surf Life Saving Northern Region’s annual awards of excellence, despite coming from one of the smallest, numerically, of the region’s 17 clubs.

“We’ve got some good lifeguards in Raglan,” quips Mark Shrimpton, who was named regional lifeguard of the year at the awards ceremony held last Saturday in Shed 10 on Auckland’s waterfront. 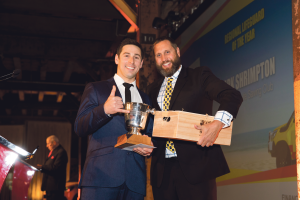 He doesn’t have to look far for another – his American-born wife, Aubrey (nee Panis), took out the same award in 2015.

The other Raglan winner on Saturday night was Sam Cron, who was named under-19 surf lifeguard of the year – a category also won last year by a Raglan clubbie, Tyla Kettle.

Local lifeguards regularly feature among the 30-odd awards handed out annually in the northern region. Stretching from Raglan to the Far North the region is the largest, geographically, in the country.

SLSNR chief executive Mark Williams described Sam – who clocked up more than 260 hours on patrol locally and elsewhere last summer – as an “invaluable” lifeguard with a real passion for the ocean and a determination to ensure everyone enjoyed their time at the beach. 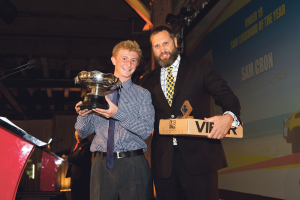 “He can read the ocean well, advise the public of any risk and keep his head if things escalate.”

Mark Shrimpton was lauded at the evening function as a “highly deserving” winner. “He has a technical skillset second to none but he also has that ability to pass on his knowledge and inspire excellence in all those he patrols with.”

While Mark – a design engineer in Hamilton – is about to start his 10th season with the Raglan club, 16-year-old Sam has progressed from being a “nipper” just four years ago to becoming rookie of the year recently for his paid or regional lifeguard season.

The St John’s College student is also a qualified surfing instructor and helped out last summer with lessons run by the Karioi Lodge-based Raglan Surfing School.

He says he loves “hanging out … having fun” with everyone at the local surf life saving club that patrols Ngarunui Beach from Labour Weekend to Easter every year.

It was quite a change, he reckons, getting dressed up in his father’s suit for the formal occasion last Saturday night. But it was quickly back to his usual attire as he was off out to Muriwai early the next day, on an engine maintenance course for northern region club members.

It’s opportunities like these that have also kept 32-year-old Mark hooked on surf life saving. From IRB or jetski training to rescue swimming with the Westpac helicopter service, “there’s always new challenges to overcome”, he says.

Rescue operations that Mark has been involved in include pulling local policeman “Deano” McMillan from the water after a boat he was in flipped on the bar and – although “not a good outcome” – a double drowning at Ruapuke on Christmas Day two years ago.

● Raglan’s Liam Cunningham was also at the weekend awards ceremony as a finalist for surf education instructor of the year, a title he won in 2016.