New mum Sharlene Poole reckons it’s “very easy” putting her own baby-whispering techniques into practice when it comes to her six-week-old, George.

“I don’t have to tell anyone what to do,” she laughs as she deftly changes his nappy. “He’s wonderful.”

This first-time mother can simply follow her own good advice which means creating a difference between night and day early on. It’s about feeding well during the day and sleeping longer at night, Sharlene says of her tried-and-tested baby routine.

And so far so good, she adds, with George generally up only once at night to feed.

At the age of 40, the Raglan-domiciled author of ‘Baby Whispering’ is loving being at home with a baby of her own.

“It’s the first time in 10 years I’ve consistently stayed in my place,” she explains. She’s lived the past decade in Bayview Rd, the last few months of that period in her very own home which overlooks the harbour on one side and the Te Uku windfarm on the other.

As a stay-at-home mum she can meet friends downtown and visit, things she couldn’t find time for while commuting up and down the country.

She’s also had plenty of coverage in parenting magazines, put instructional DVDs together and in 2012 launched her book, ‘Baby Whispering’, described as “the practical handbook that every mother needs when preparing for a new baby”.

Now she can relax at home and apply her long-held nurturing skills – she began way back as a British-based maternity nurse living in and working 24/7 with newborns – to baby George who weighed in at birth as a healthy 7lb 13oz bundle.

George – named after Sharlene’s great grandfather – is a “donor” baby. Sharlene always wanted to start a family “at some stage”, she says, and now was the right time.

“I think there’s always been pressure on women of my generation to have a career first,” she mulls.

Despite going it alone, Sharlene’s been overwhelmed with support from family, friends and former clients. 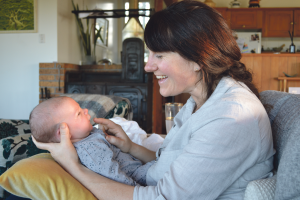 Her mother from Coromandel has come and stocked her freezer with meals while a local friend dropped in one day last week after a surf, offering to chop some firewood for her. “Awesome!”

As for baby gear, she’s “inherited” much of it – from bassinets down to most of George’s wee outfits – from grateful parents who’ve passed things on after Sharlene’s help with their new arrivals.

But there are also the sponsored gifts: a portacot, mattress and bedding from Nature Baby in Auckland;  a car seat and buggy from the nationwide Mountain Buggy brand.

Her new upstairs-downstairs home is big enough to take it all, she says, and then some.

That’s particularly fortunate as Sharlene has a plan for mums wanting a little baby whisperer magic to come and stay. “Over the years I’ve had mums in need of more than a (usual) session of four hours or ten hours with me,” she explains. “And if they came to me here I wouldn’t have to charge as much.”

But that’s for the future. For now Sharlene’s “said goodbye to the first month” of wee George’s babyhood – as posted recently on her ‘Little Miracles’ Facebook page – and has started doing phone and Skype consults again, even seeing a few local clients.

Also coming up is a second interview with Janet McIntyre from TVNZ’s ‘Sunday’ programme, following on from an initial interview while Sharlene was still pregnant. The programme will screen in a couple of months or so, 11 years after ‘Sunday’ first dubbed Sharlene New Zealand’s baby whisperer – a term hardly known here back then.

There’s also the possibility of another book on the horizon, Sharlene hints, picking up where ‘Baby Whispering’ – which covers preparing for arrival and birth right through to 12 months – left off.

And Raglan’s resident baby whisperer expects to have put in a lot of practice before that.