A $150,000 lotteries grant has cleared the way for work to begin next April on building a multi-functional creative space at Raglan’s Old School Arts Centre in Stewart Street that will provide “additional capacity” to meet growing community needs.

The $488,000 project will replace both the old clay shed and a Lions Club shed alongside with a two-storey structure whose upstairs level will cater for everything from theatre and music to drama and tai chi.

Downstairs, potters will have their own kiln room while local Lions will have a better area to sort and launder secondhand clothes destined for their popular op shop in Wallis Street.

“These are the things the community identified as important (to have) a few years ago,”

Raglan Community Arts Council chair Rodger Gallagher told the Chronicle.  “And we think we have enough funding now to get started.”

Rodger reckons he’s “lost count” of the funding applications he prepared last year to try to get the project off the ground. “Several people have turned us down,” he admits.

But a recent Lottery Grants Board contribution of $150,000 has given the arts council the confidence to go ahead with the build, he says, even though it’s still shy of about $100,000. 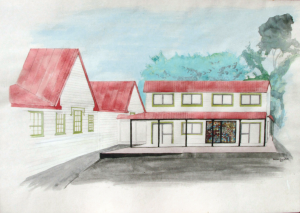 In approving the grant the board’s community facilities committee – which in its latest round was only able to approve 30 percent of requests as they totalled a whopping $27 million – said the Raglan community had clearly expressed its need and support of the new facility.

The Old School project attracted its first funding about this time last year from the Logan Campbell Estate, which historically looks after the old Auckland province of which Raglan was a part.

Other funders include the St Lazarus Trust – which some years back also helped with the clay shed – Raglan Community Board, Raglan Lions Club, Waikato Wellbeing Trust, WEL Energy Trust and Trust Waikato.

A lot of hard work by volunteers and “amazing” support from the Whaingaroa community as a whole has paid off, Rodger says. “We will be continuing with fundraising activities so we have enough to complete the project. With this and a frugal approach to construction we are confident we can do it.”

He adds that in parallel with fundraising the arts council has been working through Waikato District Council’s regulatory and other approval processes since 2015, and hopes to have the final stamp of approval early next year.

At 134 years the Old School is Raglan’s oldest building without significant recent modifications, and continues to be a focus for the community as a learning and activities centre.

It was saved from demolition around 1980 through a campaign led by prominent local activist Eva Rickard and the first chair of the local arts council, Glen Young.

Volunteers then worked for the next decade on refurbishing and restoring the building, with other enhancements continuing over the years.

It was relaunched as the Old School Arts Centre in 2005, and three years later registered as a Historic Place category ll by the New Zealand Historic Places Trust.

Picture above: Rodger, with plans in hand, shows where the two-storey creative space will be sited.