Foodwaste is the number one contributor to the greenhouse gas methane and leachate generation in landfill sites.

New landfills often attempt to capture methane, although recovery levels are low, and the food waste is still the main source of acidic and toxic leachate which moves through the landfill into groundwater and nearby streams. Although new landfills are lined there are no landfills in the world that don’t leak.

Waste audits conducted by Xtreme Zero Waste (XZW) estimated that 27% of waste to landfill from the Raglan community was food waste, and that it was the single heaviest component in pre-paid landfill bags once the recycling is removed.

The Xtreme team spent five years planning and trialling various systems before they decided on the preferred method to introduce into the community. Cain Brodie, Xtreme’s Operations Manager extraordinaire, worked alongside the engineers to design and implement what is known as the hot composting unit (HCU), which sits up at XZW.

Since the launch of Xtreme’s Kerbside Foodwaste Collection project in August 2017, Whaingaroa has diverted over 30 tonnes of food waste from landfill! 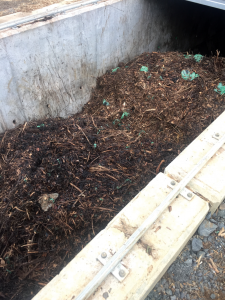 The HCU at Xtreme where the kerbside pickup goes and gets turned into compost.

The foodwaste is collected alongside the other kerbside recycling every Monday and Tuesday by Darryl, Xtreme’s expert in waste collection (if you see him doing foodwaste collection or morning/evening street bin collection, be sure to tell him thanks!)… The foodwaste is then dropped off at the HCU where it is mixed with shredded garden waste. The HCU is a specialised unit that utilises oxygen to breakdown the foodwaste and create finished compost in 12-15 weeks time.

XZW has been diverting other organic products from landfill, including wood, paper, cardboard and greenwaste. The introduction of the foodwaste project further aiding in the reduction of carbon emissions being made in landfill, especially methane, which is x times more potent than carbon dioxide from burning of fuels.. This could lead to an application to central government to exempt Raglan waste to pay carbon tax which is currently paid by ratepayers for each tonne dumped in the landfill.

Xtreme would like to thank the community for their dedication in using the foodwaste collection service. The uptake of the service has been extremely positive and households are doing their best to follow the guidelines of only giving XZW their foodwaste. During the busy Summer holidays please check for any rubbish in your kitchen caddy before putting your bag into the kerbside bin for pickup.

If you are heading away for a holiday over the coming week and would like to drop your foodwaste up to Xtreme before you go, there will be a wheelie bin available for foodwaste drop off on-site at Xtreme from Friday 22nd December. Just ask the friendly XZW yardstaff.  If you have run out of the kitchen caddy bin liners, use the note at the bottom of your compostable bag pack (or write out your own note) and place it in your kerbside bin, on top of your foodwaste bags. Darryl will see the note and place some new bags into your bin. New bags can also be collected from Xtreme free of charge.