Movers and Shapers: A series on ways Raglan reinvented itself from the sleepy seaside town of the seventies.

From the worst harbour in the country for recreational fishing to one of the cleanest, Raglan’s undergone a seachange over the past 26 years – and it’s all largely down to two people who cared.

Back then in the 1990s keen local fisher Fred Lichtwark took the first step by putting up a notice in the local library asking if anyone even cared that the harbour turned so muddy after rainfall.

And environmental scientist Fiona Edwards – who was regularly observing from the deck of her Raglan West home how the sparkling blue waters of the harbour were frequently turning brown for weeks at a time – responded “actually yes I do care”.

So she met up with Fred, a one-time farmer turned environmentalist perhaps best known these days as an outspoken Waikato regional councillor, who reckoned the solution was to plant masses of trees to stop sediment and run-off getting into the harbour.

It was 1995 and, in response to a leaflet drop, 70-odd concerned people turned up to a public meeting in the town hall, Fiona recalls.

That same meeting also spawned Whaingaroa Harbour Care which initially had just 15 signed-up members who, Fiona remembers proudly, began to nurture seedlings in their own backyards.

A small nucleus of four to five dedicated locals have remained with Harbour Care over the years and can now claim responsibility for the planting of 100,000 to 120,000 trees a year in the Whaingaroa catchment – a massive 525 sq km area of mostly farmland.

“It’s extraordinary,” Fiona marvels of the achievement. “And it’s made a huge difference.”

She cites an old Ministry of Fisheries study showing it once took recreational fishers 18 hours on average to catch a fish in Whaingaroa harbour, and contrasts that with the situation today.  Fred for instance can catch his legal quota in a single hour.

Harbour Care grew beyond backyards and has worked since its second year from a thriving nursery just off Wainui Rd, on Waikato District Council lease land. Its first plantings were at the nearby Wainui Reserve soon after Ngarunui Beach access road was opened up.

That was then the most publicly visible farmland in the catchment, says Fiona, with 200,000 visitors a year flocking to the beach beyond in the early 1990s.

“How entirely fitting that it be planted here (in Wainui Reserve), she remarked at the time. “You have been visionaries for Aotearoa.”

A key to Harbour Care’s success has been the buy-in from local farmers to the value of riparian planting and fencing of waterways.

“They got it,” Fiona says of landowners’ co-operation. They could see the economic and environmental benefits that came from planting beside waterways to control run-off, she adds.

Put simply, the more plants there are the cleaner the water in streams and harbours, Fiona explains. This in turn gives better fishing, safer swimming and improved water quality for threatened species like the Maui dolphins.

Harbour Care initially gave its plants away to farmers, then charged a nominal $1 per plant. Now it’s still a modest $3.50 to $4.50 each for plants “in the ground”.

As a result of the combined push 95 percent of Whaingaroa’s coastline is now fenced off, says Fiona, and the results can be clearly seen at low tide through the regrowth of  large areas of seagrass.

Whaingaroa harbour has been transformed, she says, from a polluted to a flourishing ecosystem.

It costs $350,000 a year to run Whaingaroa Harbour Care, a figure which includes paying the lease and a small team of staff each planting season. Fortunately landowners have pitched in to meet the cost of trees, while as an incorporated society Harbour Care has also been able to secure funding grants.

So where to next?  “We are aware of the need for climate action and are currently trying to perfect our (economic) model,” Fiona reveals, “by moving into more planting of native trees for carbon capture.”

In practical terms that means Harbour Care is looking again to work alongside any landowners willing to set aside at least one hectare of land for planting of natives, which absorb carbon dioxide.

More than a quarter century on Fiona’s convinced there’s plenty still to be done and “a future for groups like ours”. 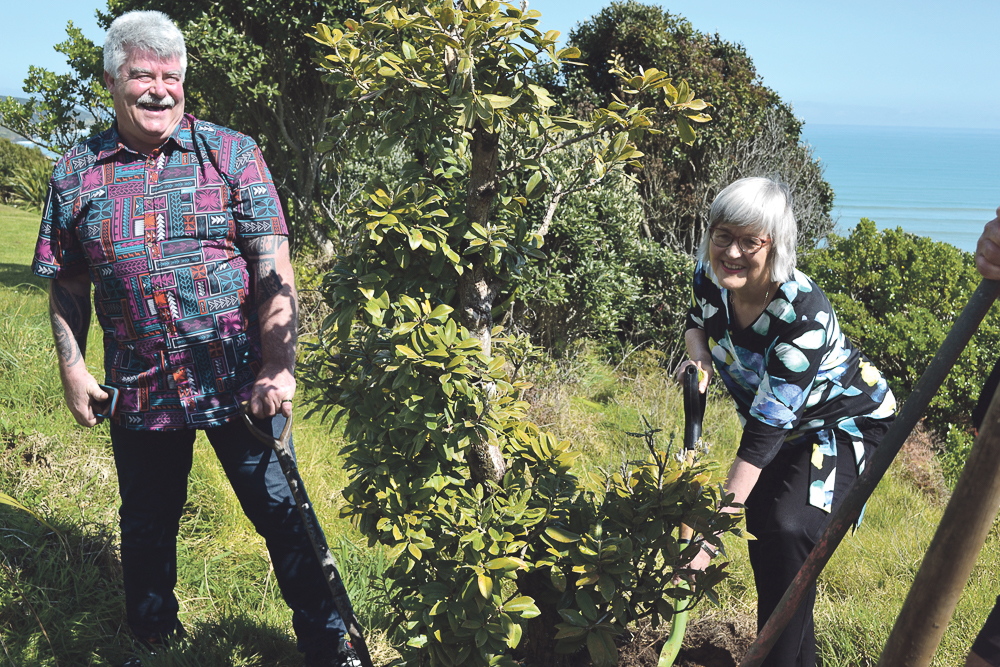 A food-only night market – modelled along similar lines to those overseas
With Raglan Community Radio celebrating their 25th birthday this year, the Chronicle
A special play by the Whaingaroa children enrolled in home school, Dragon’s
From Blue River Baby, a band well known for their epic energy,
Phantom Billstickers National Poetry Day 2019 will be celebrated this Friday 23
Go to Top