Raglan environmentalist and Wainamu Beach resident Angeline Greensill didn’t expect a big storm in early January – but despite it all the 6000 dune grasses planted late last year are thriving, she says.

Fencing and signage erected along a one-kilometre stretch of the beach to protect the dune plantings has also been effective, she told the Chronicle. “As long as you designate an area (not to be used), people will respect it,” she adds.

Meanwhile the spinifex at the beach – referred to colloquially as Ocean Beach – is now dropping seeds which will be propagated in the Kokiri Centre nursery ready to add to additional plantings later this year.

The work is part of an ongoing programme by volunteers from Whaingaroa Beach Care and Tainui hapu to counteract the effects of coastal erosion.

Angeline – who is Tainui’s environmental advocate – explains that sand deposited at the beach by the sea, once it has dried,  is blown onshore by the wind and captured by plants like spinifex and pingao. When the sand is wet again it cements itself in place. 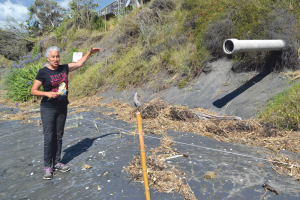 Angeline explains that the old sewage pipe is her measure of
how much the beach has risen over the years.

Although “we could’ve done with double the amount of grasses” it’s still adequate, Angeline says. “We have a few spare plants (to fill in the gaps) from our own nursery.”

Meantime there are a few stakes to drive back into the sand, she adds, to reconnect sections of the string fence that entangled or were pulled apart by last week’s storm.

Angeline is philosophical about the cyclic nature of sand movement and knows “you can’t beat the sea”, but is convinced community efforts to protect the dunes are working.

She can see progress by standing at the old Raglan sewage pipeline which juts out onto the beach below her seafront home – which itself has been threatened by the tide over the years.

“The beach has risen,” she insists, showing how the pipe was once way above her head but is now eye-level.

“At some point we won’t have to do this (dune planting) any more.”

Her late father Tex Rickard helped during his lifetime by diligently building fascines to trap sand on the beach in front of the recently renovated Kokiri stage, where a retaining bank of tyres and plantings was also built back in 2014.

The surplus tyres will soon be removed from that area, says Angeline, and people are being discouraged from walking their dogs over the now-stabilised bank by ‘private property’ signs which also ask the public to “please respect our whenua”.