A century ago, the Great War had occurred more than 12 months ago (though at least one soldier returned to Raglan as late as April 1920), the influenza outbreak was almost over (3 cases in February) and things were getting back to normal, except that it was a new normal, with motor cars taking over from horses and the first aeroplane arriving, but shipping was still important and a survey for a Hamilton- Waitetuna-Raglan railway was started by a new Light Railway Board.

In January 1920 a Waikato Times article, ‘The Old Days Pass’, summed up the changes, saying,

“This year should mark an epoch in the history of Raglan, inasmuch as it will see the last of that old institution, the Raglan horse coach. For the last few years that long blue snake (the metal) has been creeping nearer and nearer to Raglan, and swallowing up the mud in its track. Henceforward all mails and passengers will be conveyed to Raglan at all times of the year and in all seasons by motor service. . . But the Raglanites, having seen the advantages of being brought nearer to civilisation by metal road and motor service are becoming alive to the situation, and, not content with this, are clamouring for a railway. . . What the railway has done for Hamilton the railway will do for Raglan, with a good permanent line via the Moerangi and Waitetuna Valley. Raglan will become the marine suburb . . . Hamilton’s business men will have their homes by the sea, and go backwards and forwards to their workshops and streets, and houses will spring up in every direction.”

A few years later, the Town Board said “Quite a quantity of local business went away from the town” as a result of easier access to Hamilton. However, the 1920 population of 291 grew to 350 in the next decade.

Gravel was also being added to Wallis St, Te Mata, Waitetuna and Waingaro roads at that time. Metal required quarries and, in March, the manager at Kauroa Quarry, Thomas Dunlop, was killed by explosive.

“Never has the little township had so many visitors. The hotels and accommodation houses were booked up, months ago, and the seaside cottages that have sprung up along the beach were crowded with families, while the white canvas of tents was spotted everywhere.”

Even the Hamilton Municipal Band had to delay its visit as they had nowhere to stay. It was about 1920 that Mrs Walker opened tearooms in Wallis St, near the Old Stone Jug. One report said there are only a few of the old settlers left, the majority of the new-comers being returned soldiers.

Possibly that increased support for commemorating the war dead. The first ANZAC Service was held in the Town Hall on Sunday 25 April at 3 pm. It was considered whether to build the footbridge, or a Soldiers’ Club as a war memorial, but then a cenotaph was agreed on. A rating area to pay for the bridge was also discussed. The war memorial opened in 1922 and the bridge in 1926. A concert was held in Te Uku school for their memorial hall, which opened in 1921.

Another new arrival was Raglan’s first solicitor, William F. Johns, who was followed by his family on the ship from Onehunga. He had offices in Bow St until his death in 1956.

However, the old Raglan was still evident. The Town Board was reported as, “taking drastic measures” to stop stock wandering the streets. John Galvan’s team of bullocks, from Te Mata, were still doing contracts, though, about 1920, Walmsley Brothers bought a 1 ton Model T Ford, to cart cream to Raglan dairy factory.

As trade revived after the war, butter prices went from 7d per pound to 2s 6d, so Raglan Co-operative Dairy Co. was doing very well for its 79 farmers. In early September they asked the Harbour Board to put a small shed on the new wharf to keep butter cool when the ship was late. It’s therefore not clear how this photo of wharf with sheds came to be in the 30 September edition of the Auckland Weekly News, after Whaingaroa Harbour Board, “formerly took it over”. In November the Waikato Times reported that the wharf had been passed by the Marine Department and the 1889 Long Wharf, off Cliff St, was being demolished and the timber and rails stacked for sale.

The Northern Steam Ship’s 400 ton steamers, Rimu, or Aupouri, still left Onehunga at 2pm every Monday for Kawhia and Raglan. In March the Rimu ran its annual schnapper fishing excursion. Wharves around the harbour, at Ponganui, Ruakiwi, Waingaro and Te Uku, were linked to the steamers by launches, such as Eired Carr’s ‘Tuatea’, bought from Billy McQueen in 1920. The launches towed up to 12 tons on a barge, mainly fertilizer up the harbour and wool back to the wharf.

This photo was also in that 30 September edition. It wasn’t until December that it was announced a grant of £1000 would enable metalling of the 60 chains (1.2km) of mud near Okete, on the Hamilton- Raglan road, by the end of 1921. The new road was also vulnerable, with 22 slips, closing it for a month, after floods on 7 June. The Times reported, “Raglan is therefore, isolated, except from the sea, as the road from Waingaro In Ngaruawahia is not yet usable owing to the working of the punt at Ngaruawahia not being possible on account of the height of the Waipa River.” The Ngāruawāhia bridge had collapsed in 1916 and wasn’t rebuilt until 1922. 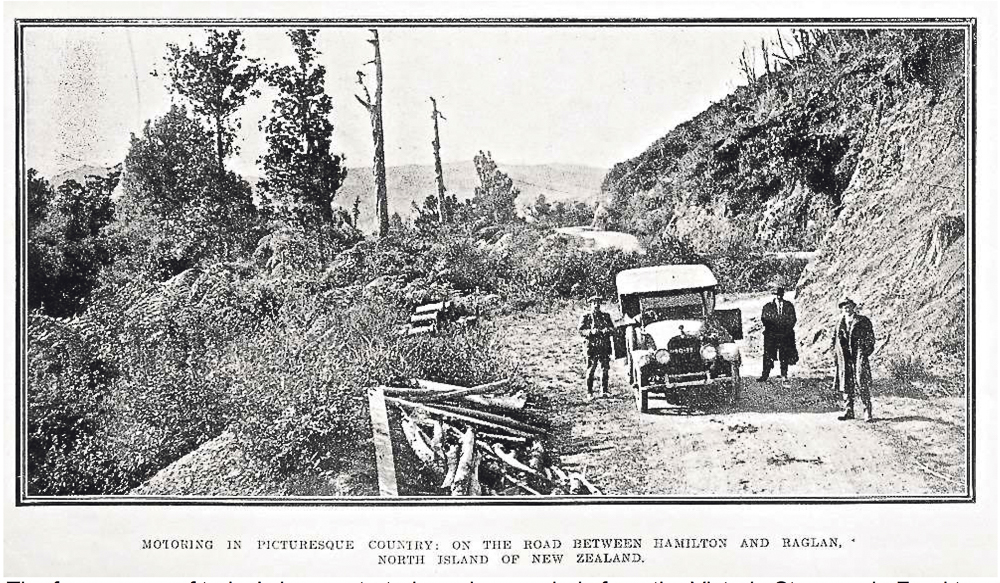 The forerunners of today’s buses started running regularly from the Victoria St area, via Frankton railway station. A single fare cost about a quarter of an average weekly wage. Noel Robertson opened a garage depot in Hamilton as well as Raglan and joined AARD, mainly taken over by NZR Road Services in 1928. Noel later wrote that, “Dick Turpin took over Bob Aitken’s mail run and we ran in opposition for several years. . . I often found him without a jack and lent him mine, and sometimes pulled him out of the mud when he was stuck.” Dick must have suffered a setback when, in May, his uninsured car was burnt in his Raglan garage.

With candles and in the absence of mains water, or a fire brigade, fire was an on-going problem. In August, Mr Gilmour left his shop, on the corner of Bow and Green St, about 9 pm, but 3 hours later it burnt down. In 1928 it was rebuilt and is now Tacos cafe.

Bad luck for Gilmours may have been good for Farmers, as the Farmers Union Trading Co took over the house and store on the corner of Wi Nera St (this 1900 building is now a take-away and shops) in May. At that time the co-operative had 31 stores in small towns from Kaitaia to Ongarue.

In April the Roman Catholic Bishop of Auckland, Dr. H. W. Cleary, made a brief trip from Auckland in one of the earliest Boeing seaplanes, which flew from Kawhia at 9.30, arriving in Raglan at 10.20am and leaving at 1.20pm. It carried a small amount of mail. The Anglican church was also active, with St. Peters Sea Scouts being formed by the Rev. C.B.W. Seton. 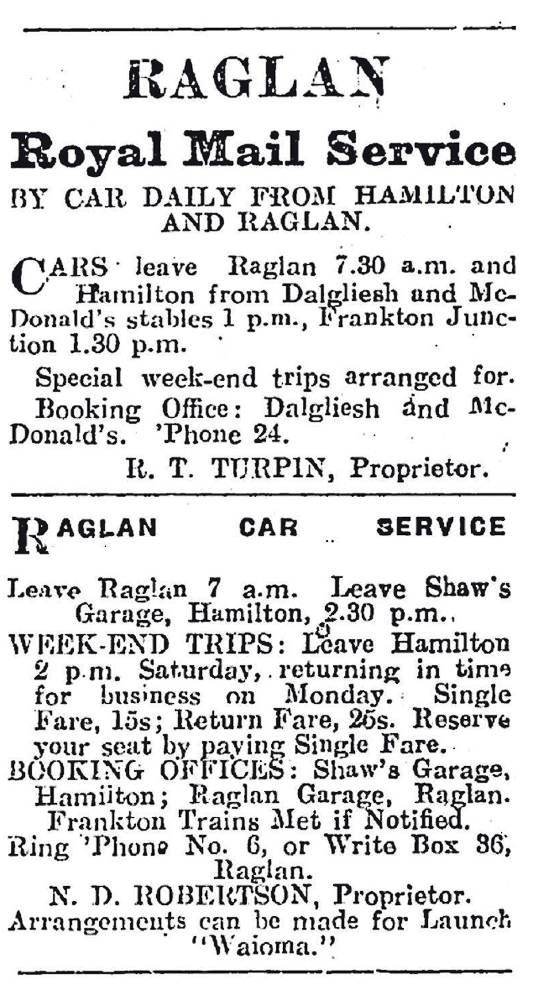 At the time, 1920 would have been seen as a promising start to post war recovery. Raglan got a new wharf and started the process of getting the footbridge, but few would have envisaged that, by 1928, camps of unemployed would be working to widen the top of the Divy.