Seven girls and their mothers shared a special “journey” recently exploring their feminine identity through the revival of ancient Māori rites to support the 11 and 12 year olds as they transition from childhood to young womanhood.

Described by local mum Cassandra Arthur as “quite transformative and essential”, the four-day Kōhine Rite – held across six locations around Whaingaroa and Waingaro – culminated in an overnight campout and a celebratory reunion with the community. 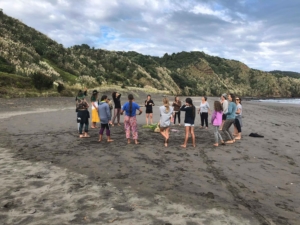 The whole experience was magical, Cassandra told the Chronicle, as they journeyed together to an understanding of “how our bodies work as women” and “our connection to nature”.

Monika de la Cruz Carbello said she and her daughter also gained lots of insight into old rites of passage. Both appreciated the cultural dimension which was delivered mostly through storytelling and imagery.

The experience was “really quite profound”, she said.

The weekend began at the local surf club, where the girls and their mothers got to know one another and the old but new rites of passage. Some of the girls arrived apprehensive, said facilitator Madelin Watson, but quickly warmed up to the journey ahead. Their “Māmās” had put in the groundwork months before – fundraising and so on – to make it all happen.

Kōhine was a community-led initiative, Madelin explained, like its forerunner Poutama Tāne rites of passage for local teenage boys and their fathers. It was essentially a learning journey weaving together ceremony, education, challenge and celebration – designed to support young people and their whanau to navigate the passage from childhood to adolescence.

Highlights included a dawn pure and tohi – a cleansing and affirming ceremony – led by Māori elders at Ngarunui beach, followed by a moving-through-transition rite for mothers and daughters with local choreographer Patti Mitchley.

The rites were designed to support girls to separate from their childhood identity, transition into their changing lives and bodies and reintegrate with their community as young women, added Madelin whose background is with Natural Fertility New Zealand.

Madelin was delighted with the outcome of the inaugural Kōhine Rite and the feedback has been really positive, she said.

Her partner Tiaki Coates runs the corresponding Poutama Tāne Rite, which will be held again in November.

The couple have established local charitable trust Poutama Rites of Passage whose work is currently supported by the J R McKenzie Trust.

*To find out more email info@poutamarites.nz.

On Saturday, May 15th the Whāingaroa Whānau Hoe Waka club hosted the
Three new buildings have been officially opened by Ngāti Māhanga/Hourua at  Raglan
Noted ceramic artist and tutor Susan Flight has turned author in her
This week the Chronicle caught up with Luna Beauty, run by Hope
More than 20 years after marrying her Fijian husband in Stewart Street’s
Go to Top