Possum numbers in the Raglan region took a dive last weekend, thanks to the Kids’ Hunting and Fishing Competition.

Fifty-seven possums were strung up along a gate at the Raglan Rugby Club, where the weigh-in for the contest was held on Sunday.

The toll on the pest population would have been far greater, however, as only the heaviest possums made it to the weigh-in.

Twins Lucille and Rosa Jowsey, 9, struggled to carry one possum and one hare each after spotlight hunting with their parents and two friends in Te Mata. *pictured above

Mum Amber Hartstone said the girls selected the heaviest possums and hares, with 12 possums shot on their farm the night before.

Club chairman Rob Maniapoto, a keen hunter himself, said it was successful day and the contest was a “win-win” for everyone, regarding pest control.

However, the main focus of the day was about encouraging kids to learn about hunting and food gathering.

“It went really well, the kids enjoyed themselves,” said Rob.

There were cash prizes for winning entries – $300 was the top prize – and plenty of activities for the kids to take part in, including hare, possum and pig carry races, a hay bale obstacle course, a bouncy castle, Zorb balls and archery.

Spot prizes included Ridgeline hunting garments, beach tents and hats and beanies, and there was a raffle of outdoor furniture sponsored by Thomsons Timber in Whatawhata.

“It’s good for Raglan because it gives the kids who live on the outskirts of town in a farming environment something to do,” said Rob.

“We had a lot of first-timers there that were happy with the concept and loved it, so that was good.

He said he would hold the event again next year, and thanked all the sponsors “because without them it wouldn’t happen”.

Next year, he intends to have a food stall to highlight the food gathering side of hunting, “where we will be cooking up the wild game”.

As for this year’s bounty, the fish were kept on ice and taken home for dinner, and the possums all got machine-plucked for their fur. 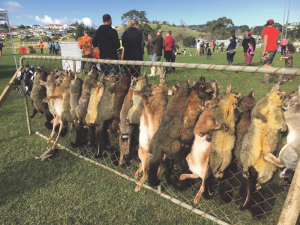