It was the fastest Karioi Classic event in history – no one competing in the final 43km Classic race took longer than four hours and record times were made in the 87km Enduro and 57km Classic XL races.

“Maybe we should do drug testing next year and check for electric motors,” jokes organiser Dirk De Ruysscher, owner of Raglan Cyclery.

But it was also the best weather the event has ever seen and the roads around the mountain hadn’t had a load of fresh metal dumped on them recently.

“The weather was a factor – light winds,” concedes Dirk, compared to last year’s gale-force winds that brought a tree down across a road. “And also the course was quite fast – they hadn’t put any new gravel on there, that makes a difference.” 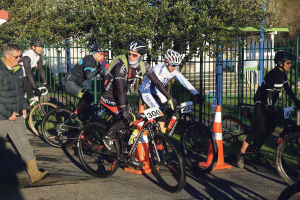 A record number of 349 riders registered for the eighth annual event – about 70 more competitors than the previous record.

“Funny enough, we probably did less advertising this year but from Wednesday onwards it was clear it was going to be a really nice day,” says Dirk.

About 200 of the registrations came in the finals days leading up to race day, including that from 9-year-old Quin Howard who rode with his dad in the 43km Classic.

The oldest competitors were 70-plus, and there were also many riders aged 60-69.

He says the range in ages shows that “biking is for everyone”.

The races started at the corner of Wainui Rd and Stewart St.

“The best feeling is when you see the start. In the 43km we had almost 200 competitors. It’s nice to see the cyclists are taking over the whole town – no cars!”

This year there were no major injuries or issues with naughty dogs wanting to run with riders. One rider came off his bike on a corner and put a hole in his knee but completed the course.

Co-organiser Lisa Thomson says she had lots of “awesome” feedback from competitors about the event.

Two young girls had set up a drinks station on the corner of Ruapuke and Waimaunga roads, all ready to support the riders.

“They were encouraging the riders on: ‘You look great in that colour, keep riding’,” says Lisa. “The competitors were really appreciative. I love that the community gets involved, that’s awesome to hear as an organiser.”

Lisa says competitors enjoy the views riding around the mountain and that they have to put some effort into the race. “It’s not a walk in the park, they really like that feeling of accomplishment at the end of the race.”

Competitor Emma Hadley from Auckland, who came first in the 85km Enduro women’s division, says she loved every minute of the race.

“This was honestly the best event I have ever done and so well organised … I cannot wait for next year! Everyone was so friendly and welcoming.” 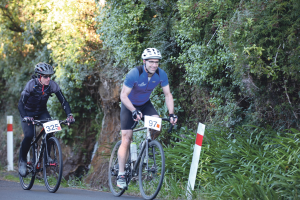 On Saturday, May 15th the Whāingaroa Whānau Hoe Waka club hosted the
During the first week of April, a street-ball style basketball competition will
The story of four children who tumble out of a wardrobe into
Christmas in the Park is just over a week away, so make
If you need affordable housing, or have any ideas about what you
Go to Top