When we first set out to publish the Surf column, we thought we’d highlight the who’s who of surfing in Raglan right now. But we realised that you really cannot talk about the present without understanding the past.

It’s a history that only started in the 60’s, but it lit a flame within the surfing community that has paved the way for Raglan to become one of the top surfing destinations in the world.

After a recent conversation with some of the surf crew from the ’70s, I was pointed in the direction of Bill Walters, aka Butch, who surfed alongside The Originals in the early ’60s.

Butch moved to Raglan at the age of five. When he was growing up, no one was surfing in Raglan. It wasn’t until he first saw the film Gidget (1959) and discovered Miki Dora that he got hooked. It inspired his interest in surfing and soon after he saw the surfboard-laden cars arriving in Raglan as well.

Butch would walk to Manu Bay and watch some of the original board riders surf The Point. He reckons Campbell Ross and Mike Court were the very first to ride that infamous left-hand break. He respectively refers to them as the pioneers of surfing in New Zealand. 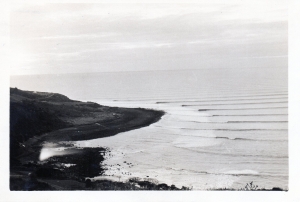 The first surfboard Butch bought was a second-hand dog. After investing in a Peter Miller custom made board, he claims “the rest is history”. Those were the days of no leg ropes and no wetsuits, and really no surfers. The surfers were out numbered back then. There weren’t any ‘local’ surfers aside from Butch and a couple of guys and the rest were all from Hamilton, Auckland and Australia.

Indicators wouldn’t be discovered until the mid ’70s, but they surfed Whale Bay and Bone Yards. And the boat ramp at Manu was fairly basic back then, so the left-hand break went right into the bay, landing Raglan the title of the world’s longest left-hand ride.

One of Butch’s fondest memories? Riding an 8ft swell that had been caused by an earthquake on the other side of the world. Back then, riding only huge single fin longboards, it was hard to stay in control, but he still refers to that night as magic. Butch was also the winner of the first Junior’s Point Board Rider competition in 1964.

Butch has been out of the water for a few years, but he’s gearing up for a summer on his freshly glassed longboard. Keep an eye out for those ol’ salty dogs, you never know who you could be surfing alongside.