Their first contest, The Junior Point Boardriders Competition, was held in 1964 and was won by local Butch Walters, who occasionally still makes his way out in the lineup today.

Because Raglan is known worldwide for its surf, the nonstop stream of visiting surfers can seem quite daunting at times. The Boardriders’ contests are family-friendly events that give locals a chance to enjoy Manu Bay without the crowded lineup.

The club helps to provide a home base and sense of ownership among surfers in the community. Club member Marcus Hodgkinson hopes to see the Boardriders grow as a staple for up-and-coming local surfers, providing opportunities for kids to get more involved in the water and have something to call their own.

Boardrider clubs around the country are coming together to strengthen the collective surfing opportunities available. The clubs have set out to host various championships throughout the year to help fi nd and establish New Zealand’s Premier Boardrider Club. A team of Raglan Point Boardriders will head to Whangamata in March for The Hurley New Zealand Club Championship to compete in team and individual events.

The LJ Hooker King of the Single Fin 2017 has a little something for everyone, including the infamous Pie Eating Contest. Surf categories for the day include: Single Fin Retro, Log, Twin Fin, Anything Goes/Most Outrageous (i.e., door, ironing board, inflatable device, chilly bin lid, etc.) and Past Winners. Plus extra points will be given out for the best dressed. Anyone can enter the contest on the day, which will kick off around 9am.

Local shaper and craftsman Mark Camenzind has handcrafted an iconic Wilson single fin board for the contest, which was sprayed by local master artist Neil Wernham. The board is up for raffle with all proceeds going to the Raglan Point Boardriders. The board is on display at Raglan Surf Co with tickets on sale for $5 and a winner will be chosen on the day.

*Photo thanks to Jawn Millek 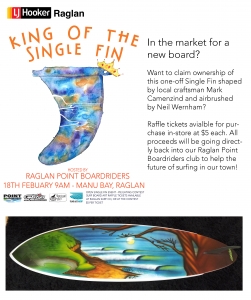 Raglan’s talent-laden Point Boardriders Club conquered all comers at the inaugural Hurley
When we first began the surf column, we set out to shine
One of the phrases that has inspired Phil [McCabe]1  over the years
It is both the love of the water and the love of
There were many instances throughout our conversation where I witnessed both Malibu’s
Go to Top