Born and raised down in Christchurch, New Zealand, Conor McLennan has made quite the move up to Raglan to improve his surfing career.
Leaving all he knows at the age of 15 to join the wild west coast, North Island style, not fully aware of the opportunities he was about to come across.

In this issue’s Surf Series I will be asking Conor how his life changed and how he has changed throughout his journey at our local surf academy.

The surf academy has been an asset to this town for years so I think it’s important to acknowledge those who have travelled far and wide to attend the school. Many events have occurred in the past three in a half years for Conor, both good and bad so I wanted to ask him how he’s handled the tough times while being away from family and also how he thinks life has changed and if it would have been the same if he had stayed in Christchurch.

What was it like to move so far away from home without any family or friends?

I surprisingly found it really easy to move up to Raglan; even though I was only 15 at the time I was just so keen to surf and to become a better surfer. I had heard so many great things about the Raglan surf academy, and of course Raglan in general, so the move was nothing but exciting. My biggest worry was meeting my homestay, family not really knowing who I was going to live with for the next few years made me nervous; but Ben and Celeste made my transition to high school so easy I honestly couldn’t have asked for a better homestay.

Do you think you’d be a better surfer if you had stayed down in Christchurch, why?

Definitely not. Living in the North Island has given me so much more reason to surf. In Christchurch the  water temperature can get as low as 7°C which makes it so hard to surf. Even in the summer I still wear a 3/2 wetsuit.

Also living in the North Island is better because there are a lot more surf breaks that are insanely good, whereas down home, it could take at least two hours to find a decent surf break if the local breaks aren’t working.

Being new to the Raglan surf scene did you find it intimidating or inspiring surfing with local legends such as Luke Hughes, Chris Malone and seven-time national champ Billy Stairmand?

Wow you really talked those fellas up! I was 15 when I moved up here so I was just a frothing grom. I was keen to just surf my brains out – which I did for ages and still do. There was a side to moving here where I was a bit intimidated about but it never really got to me. I had never seen anyone surf so well in New Zealand, so watching them I was blown away. I just really wanted to surf like them.

How has the surf academy improved your surfing?

The surf academy has certainly pushed me to my limit of training, not only did we surf everyday, fitness training out of the water was 2-3 times a week. Every surf session was filmed as well which helped me identify my weaknesses. I was constantly thinking about how I could improve my surfing so knowing what I needed to focus on through footage made it so much easier. Being in a classroom full of surfers also drove me to not only be the best surfer I could be but to use my classmates as competition to push myself as well. 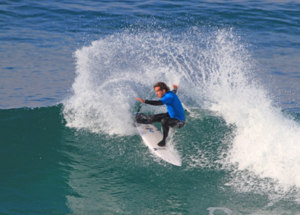 Why do you surf?

I like to do well in competitions so I surf to practice, but there’s also the social part of it; I get to meet a lot of new people all ages which is pretty cool. Also at competitions I have the opportunity to meet people I idolise or coaches that have trained pro surfers which for me is such an honour.

Surfing is what I love to do so whenever I’m stressed out or having a bad day going for a surf helps me clear my mind, and it takes me away from whatever it is that’s irritating me. Throughout the past couple of years I have noticed I’ve become socially anxious so surfing also helps me deal with my anxiety or even just the environment of surfing calms me down.

What achievements have you accomplished while being a student in the surf academy?

A massive perk of being a part of the surf academy was being able to travel all over New Zealand. Living down in Christchurch made it hard for me to compete because the majority of surf competitions were held in the North Island. So throughout my years in the surf academy these are a few of my greatest accomplishments:

1st in the under 20’s at the Cold water classic and 4th Open Men’s division.

Having immediate family living down in Christchurch how did it affect you when tragedies such as the recurring earthquakes and the haunting terrorist attack happened?

It was the worst feeling ever, all I wanted was for my family to move up here. While the Kaikoura earthquake was happening my mum called me in the early hours of the morning and when she had told me what happened my heart dropped. It was lucky that I even picked up the phone. I felt helpless because the only thing I could do in situations like that was sit and wait for information.