They say every picture tells a story and that’s exactly how the Raglan & District Museum plans to record for posterity what it was like to be holed up in town during the Covid-19 crisis – with an exhibition of photographs taken over the 50-odd days of lockdown.

But it will be a display with a difference as the museum society is depending on locals to supply all or by far most of the snaps for the planned exhibition.

The museum put out a public appeal for photos recently on its Facebook page – asking “What did you get up to during lockdown?” – but is hoping for a significantly larger response than it has so far attracted.

“We want to see local projects, activities and happenings at alert levels 3 and 4 in particular,” society president Ken Soanes told the Chronicle as the museum prepared to re-open its doors on Tuesday.

“People will remember this time for many years to come,” he said. “It’s an important bit of our history.”

He cited, as an example of the unprecedented times, the B.Rex PhotoDesign prints of Manu Bay during lockdown which show the surf pumping but not a surfer in sight. Raglan might never be like that again, he said.

In contrast at level 2 it was like turning on a switch, he added, with surfers back riding the waves and a steady stream of traffic to and from town, beaches and surf breaks.

Museum collections administrator Kaz Willoughby said she hoped to receive a wide range of photos showing what locals did or observed while at home and around Raglan during the seven or so weeks of the lockdown.

If the response was as she hoped for, the best of the images would likely be displayed in similar fashion to an earlier exhibition entitled ‘At the Beach Raglan 1900s to 1970s’, which coincidentally is still on view to the public.

On the evidence of what she’s sighted so far, she is hopeful there will be plenty of lockdown moments to choose from.

Photos she’s collected from Facebook or been sent show anything from ‘Keep Safe’ signs painted on fences and teddy bears in household windows to Civil Defence workers delivering learning packs to Raglan Area School students or Xtreme Zero Waste workers togged up in PPE gear at the recycling depot.

She also has a photo of the controversial if not infamous ‘Don’t steal our flour’ message – aimed at shoppers from across the divvy – that made a brief appearance on the town’s electronic noticeboard alongside the water tower.

On a comical note there are images too from the Facebook page in which local dad Sean Lally dressed up as zany relieving teachers for each of the days his own children were off school.

Photos like these encapsulated how different life was in the community at levels three and four, said Kaz. She added that other small museums around the country – like those in Kaitaia, Waihi and Nelson – were also capitalising on this defining time in history by collecting photos or memories.

Meantime a new exhibition – ‘Toybox Treasures’ – is set to open at the Raglan museum within a fortnight. The exhibition, featuring the toys and dolls from a bygone era, was being prepared before lockdown and is now all but complete.

Many of the items come from longtime resident Eileen Beach-Kelly’s collection, including celluloid cake toppers from her birthday cake as a five year old in 1938. There are also toys – including a first tricycle – that have been provided for display by current museum committee members. 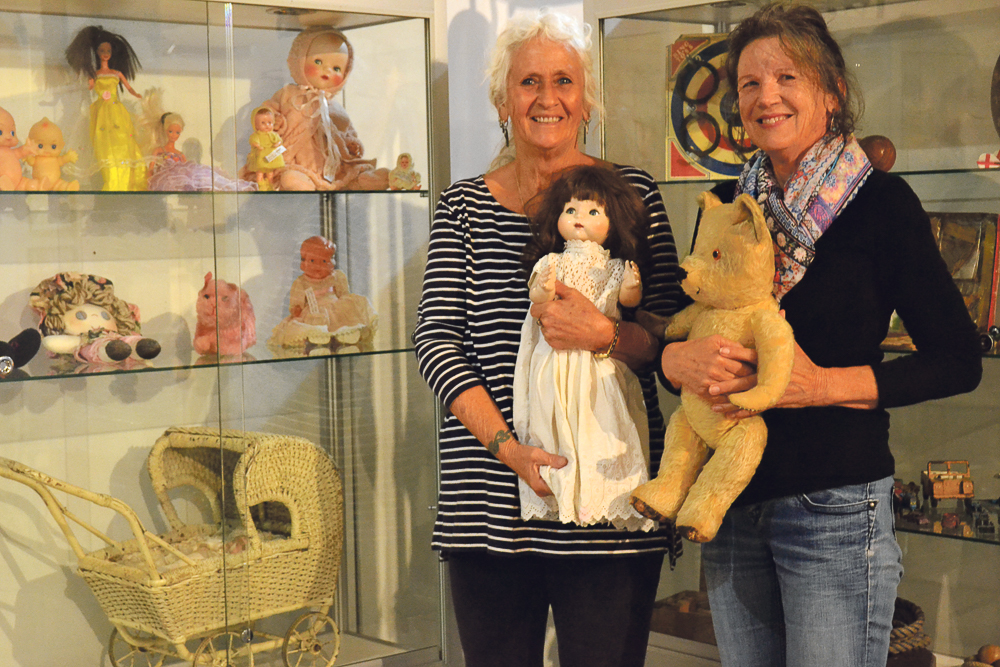