Aussie’s warmer waters and the proverbial “seven-year itch” have prompted well known local photographer Jwan Milek to sell up his Raglan West apartment and photo gallery, auction off the works and head back across the ditch.

Jwan – who grew up in coastal Wollongong, south of Sydney – first came here way back in 1971.

“I arrived on an ocean liner after a three-day trip,” he told the Chronicle. “I came straight to Raglan and surfed every day for four months.”

But now the 69-year-old Australian has ‘surfer’s ear’ – a result of chronic cold water exposure – and these days finds the ocean too chilly to be able to surf enough.

Warmer climes are beckoning, Jwan says, and it’s “onto the next adventure”.

Jwan reckons he’s pretty well set up on both sides of the Tasman, having moved his family to Byron Bay for eight years, then back here again about seven years ago. “It’s the seven-year itch,” he laughs.

Oldest daughter Kylie and her young family have since returned to Byron Bay, a surfing mecca on New South Wales’ northeastern border that’s often said to be a bigger version of Raglan.

Jwan agrees Raglan’s definitely shaping up that way.  “Now with its crowds and its cafes, yoga on the beach and on paddleboards … it’s exactly the same as Byron Bay but without the (warm winter) weather.”

Against that, Raglan during the recent Covid-19 lockdown reminded Jwan of his early days here when “there were no cars around”. It was a waste of time hitchhiking to the surf, he recalls. “You had to walk.”

With this in mind, lockdown  for Jwan felt more like freedom than isolation. He cycled every day – got fitter – and used the downtime to upskill further in photography, which he says has always been an abiding passion. “I learnt so much,” he says of his time in lockdown, citing as an example his mastering of more advanced editing and photoshop techniques.

He’s also filed lots of “isolation” photos, recording a time in history that will probably never happen again. He says one memorable shot is of people biking on the beach, hands in the air, “feeling free”.

His personal favourite however is of a lone woman bagpiper at the cenotaph downtown on Anzac Day, a time when Bow St is normally crowded with people paying their respects to locals who served in the two world wars.

Jwan says opening his own gallery a few years back – in high-profile premises on busy Wainui Rd – was something he had always wanted to do. “Now I can tick it off and move on.”

He’s also been able to live onsite as there’s a charming apartment tucked in behind the gallery.  The rare dual-use property previously housed Tony Sly Pottery – before it shifted to the Raglan wharf – and then a local Flooring Xtra business.

“It’ll probably turn into a yoga retreat next,” Jwan quips, given the discipline’s recent rise in popularity in Raglan.

Jwan’s specialised over the years in wedding, surfing and landscape photography – and is perhaps best known for his iconic shot of four fellow surfers dwarfed by a visiting Orca at Manu Bay.

It was Christmas morning 1999, Jwan recalls, and he’d just come in from a surf himself. That picture still sells, he says.

The Wharf Kitchen and Bar – where daughter Cherie works part-time – has a display of all his Orca shots over the years. “I got some beautiful ones,” he says proudly.

And he hasn’t finished yet. Just a couple of months ago when the Orca came into the harbour Jwan captured them surfing the waves at Ngarunui, and again at sunset from Wainamu Beach when they swam back out to sea.

“Beautiful … unbelievable,” he says in awe of the frequent visitors to our waters.

Ray White Raglan are handling the sale of Jwan’s property at 53 Wainui Rd, Raglan West.  As of mid-July an auction date had yet to be set. 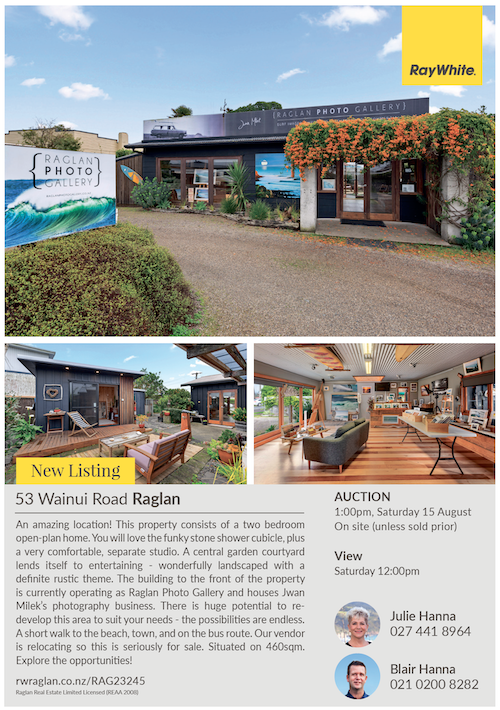