The distinctive verdigris-coated bell of a “much loved little chapel” in downtown Raglan may have been removed, but it will ring again from St Peter’s just as soon as a local engineering workshop has figured out how best to return it to its original cast bronze appearance.

Ridding the bell of its green patina, which is caused by atmospheric oxidation, is only a small part of a major refurbishment project now underway at the heritage-listed Anglican church built almost a century ago on the corner of Bow and James Sts.

Scaffolding has been erected against the Bow St wall of the building – the same side on which the bell was mounted – and is now awaiting the arrival of a new carbon fibre structure which gets bonded to the original concrete-poured wall, says Raglan Engineering owner Peter Williams.

Two other sides of the church also need major earthquake-strengthening work, he adds, revealing “there are no discernible ties of the walls to the roof, even though the building is (almost) 100 years old”.

Parts of the walls themselves show evidence of efflorescence, or crystalline deposits of salts left behind by water leaks, and the project will also address this problem.

Meantime Peter’s been googling “what you do on church bells” around the corner at his Park Dr workshop, where the old bell now sits amid a clutter of engineering paraphernalia.

“I’ve been watching YouTube,” he laughs as he experiments with the likes of methylated spirits.

And while acknowledging the bell is probably heard more than seen, he reckons he at least wants to get the paint splatters off its surface.

The bell is set to be reinstalled once the steelwork of its carrier – a structure he says was in remarkable condition for its age – has been sandblasted, galvanised and painted in Hamilton.

Peter and local builder Gus Kendall are together overseeing a project they hope will end up costing under $100,000, but which will bring the church’s earthquake compliance standard up from 10 percent to the 65 percent required for a building with a historical designation.

Gus and Peter are both longtime parishioners, each having had significant life events like marriages and baptisms at St Peter’s over the years.  For them, along with a team of other locals who turn up for regular working bees, the refurbishment is all a labour of love.

But even though much of the work is voluntary, they concede there are “lots of costs we will incur”.

All donations and proceeds from previous fundraising ventures now need to be called on, says retired church administrator Jan Mitchell, along with an $11,000 grant received recently after a successful application to Waikato District Council’s heritage assistance fund.

“It would be lovely if the (wider) community could help too,” she adds, pointing out that the Raglan community put St Peter’s into heritage designation some years ago and that it is one of only a few historic buildings around town to have this protection.

“St Peter’s is a much loved little chapel,” says Jan.  It has 25 to 30 regular parishioners – who are meeting on Sundays in the adjacent church hall during the refurbishment – but has a history of regularly attracting others in the community, like surfing families who come back to have their children christened.

“The church has strong community ties,” she points out. 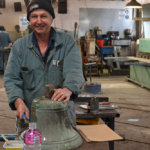 New initiative Whaingaroa Weedbusters is declaring a war on weeds in an
In the last two weeks Raglan Police have reported four family harm
After last year’s virtual event, 2021 saw the annual event and race
The writing looks to be on the wall – or in a
Gordon Jowsey and Tom Wilson, great golfing mates, were out to shoot each
Go to Top