A “slightly sad” Phil and Emily Meek will be passengers not drivers when they take the Raglan Shuttle up to Auckland next week en route to a new life on Queensland’s Sunshine Coast.

The reversal of roles comes after the longtime locals handed over the keys – all four sets – to the new owners of the thriving shuttle/taxi service they started “from scratch” five-and-a-half years ago.

“It’s been an incredible journey,” Emily said before Monday’s handover to business partners Neil McLeod and Raymond Mudekuneye at Raglan Shuttle’s new downtown premises in Bankart St. “From day one the demand for a dedicated airport shuttle and taxi grew with us and our three boys.”

Emily confessed she was slightly sad to see the business go but excited for their family’s new start in Caloundra, which Phil reckons he fell in love with last year on a trip for his 50th birthday.

“It’s beautiful,” he told the Chronicle. “A great place to live my side of 50 … good quality of life and lots of opportunities for our children (aged from four to 13).”

Phil all but grew up in Raglan, coming from Hamilton for family holidays in the 70s then settling here in the 90s. “It will be sad not to see the familiar faces any more,” he says. “I’ll be lost in the crowd at Caloundra.”

Driving the shuttles has been something of a perfect job, he adds, in that he could “talk and talk and talk” to their many airport, taxi and tour passengers over the years.

His parents used to give him a dollar to shut up back in the day, he laughs.

Setting up their “lifestyle business” has allowed the couple to live in Raglan without having to go over the divvy for work, they say.

And while it’s been a juggle with a young family, Phil and Emily – who mostly managed the office side of things from their Government Rd home – agree it’s been good in that they’ve also been able to work in with things like school trips, to-ing and fro-ing groups which often included their own children and friends.

They’ve grown the business from just one six-seater shuttle with trailer to today’s small fleet of two cars, an 11-seater van and a 24-seater bus. “We are incredibly proud of the service we have been able to provide to residents and visitors to our beautiful hometown of Raglan.”

“And we haven’t missed a flight,” adds Emily.

The demand for their around-town taxi service came as a bit of a surprise as it was more the airport runs they had in mind when they set up the business. “But the day we launched (December 1 2014) was the day the drink-driving laws changed,” Emily recalls.

Neil – who’ll be the shuttle’s main driver – is now settled in the Bankart St house, which is across the road from Raglan Four Square. Originally from South Africa, he’d been living in Auckland since 2006.

He and his “silent” business partner Raymond ventured to Raglan for the first time at the end of last year to check out the shuttle service they saw advertised on Trade Me.

The pair did their due diligence and Neil, who’s had businesses before, came to stay with and “shadow” the Meeks after Christmas for two weeks to see how the service operated.

“It worked wonderfully,” he says. “I’ve got very big shoes to fill.”

As for Emily and Phil, they say it was perfect timing and they feel “very lucky to have found the right people in all aspects”. 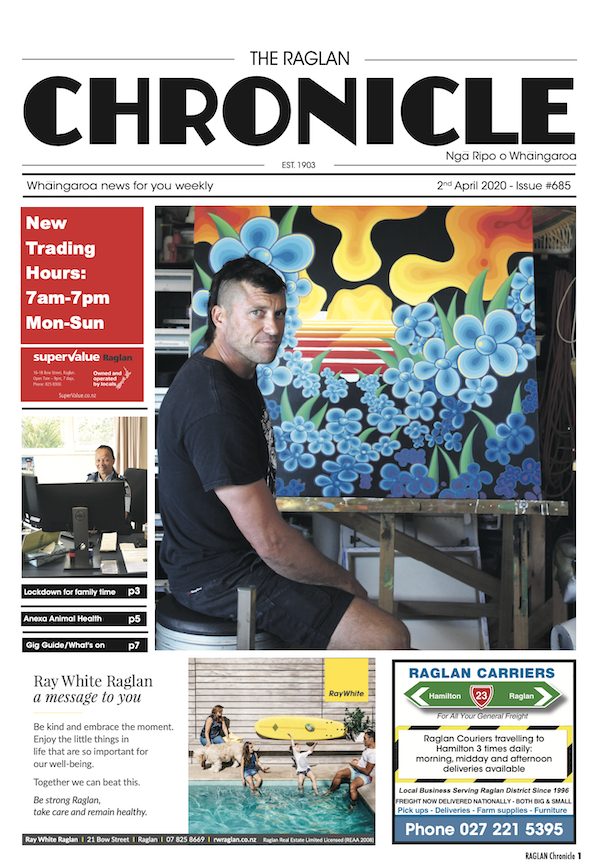 Due to the Covid-19 Coronavirus alert system being raised to Level 4
Raglan businesses acted quickly on Monday, organising delivery services for everything from
Coastguard New Zealand is asking people not to go out on the
We are op­en and fully staffed. Please take the lock down seriously,
In a recent dawn ceremony attended by local iwi, contractors, the Peacocke
Go to Top