Thank you for putting on your front cover the ‘One issue – the future of Aotearaoa’ slogan at the New Year’s Eve Parade. Thank you, too, to the supportive crowd and also to Lions for organising the enjoyable event and awarding a Special Prize. However, they publicised it as awarded to ‘Aotearoa’. That wasn’t its name, nor was it my entry. The entry was by the ‘Raglan Greens’ and the float a joint effort by several Green Party members. The slogan, as on your cover, was based on an old Green Party poster which read, “The Greens – a single issue party – the future of Aotearoa New Zealand”. On the other side, this was how ‘The solution is Green’ slogan looked. 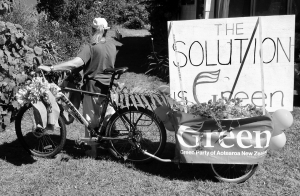 There are often two sides to a story; less often to a photo!

Latest from Letters to the Editor

To the local users of Manu Bay The Point Boardriders would like
Dear Editor Where do our Rates go to? Have you ever wondered
Dear Editor, I was up to no good today, having a good
Dear Editor, Thank you for publicising the new buses. The bike rack
Dear Editor It was with great pleasure and pride that I facilitated
Go to Top