Thank you for publicising the new buses. The bike rack works fine, though the bike sways around disconcertingly. I look forward to seeing surfboards on the new racks. It looks like they should work well too.

What doesn’t work well is having a gap of over 4 hours in the timetable and going back to a Sunday bus with only 2hrs 30mins in Hamilton, rather than the current 6hrs 15mins. How can NZ Transport Agency describe that as “a high quality transport option”?

Although the consultation earlier in the year showed the bus as going out to Manu Bay at weekends throughout the year, the timetable now shows that it ended at Easter. A pity surfers won’t get a chance to try out those racks until October. The $4.50 fare may put them off too. Hamilton fares are expensive at $3.80, but we have to pay even more.

It was also unfortunate that the publicity didn’t include mention that the 11.20 has been retimed to run at 1.40; hope there weren’t many passengers left waiting. 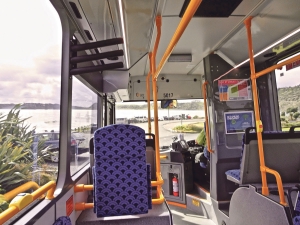 Despite global warming concerns and the fuel efficiency of buses, local and national politicians seem to show little interest in getting our bus use up from the current 2% or so to the 20% or more found in most other OECD countries. Why?

Latest from Letters to the Editor

To the local users of Manu Bay The Point Boardriders would like
Dear Editor Where do our Rates go to? Have you ever wondered
Dear Editor, I was up to no good today, having a good
Dear Editor It was with great pleasure and pride that I facilitated
Dear Editor, I am writing in response to Sarah Johnson’s letter to
Go to Top