“But I don’t want to go among mad people”, said Alice.

And Raglan Theatre Academy certainly delivered a mad, fantastical ride for the audience with their production of Lewis Carroll’s timeless classic Alice in Wonderland at the town hall on the weekend.

A melding of Carroll’s much-loved books Alice in Wonderland and Through the Looking Glass, director Ruth Hare flawlessly captures the essence of his quirky characters and nonsensical play with words.

From the moment Alice falls down the rabbit hole which is captured through the clever use of the set design you know you are in for a treat.

The much-loved characters were brought to life by the talented cast – Alice, played by Summer Maybee-Waitere, is just how you would imagine; curious, delightful, clever and slightly naïve being led astray by the White Rabbit – Annie Fisher – who bounces around the stage with boundless energy.

Matthew Roughton and Josh Alexander as Tweedledee and Tweedledum, inject the perfect amount of humour with their impeccable comedic timing and Cassidy Hanna as the Chesire Cat is a purrfect, purring puss.

The White Queen – Ayla Standley – is delightfully absent-minded and anxious and the Queen of Hearts – Griffin Pohutakawa – captures the awfulness of the character with her constant screeching ‘off with his/her head’.

The Caterpillar- Henry Fisher – is wise in a dreamy way as he attempts to help Alice and the Jabberwocky fight scene is entrancing as Alice overwhelms the creature with her sword.

The stage crew eerily creep around the stage seamlessly changing the stunning set, which is cleverly designed to mimic a chessboard optical illusion with the addition of the looking glass that also acts as portal.

The flowers embody their floral attitudes to a tee, the wind-up toys are delightful miniature versions of the lead characters and the Pirate Sailor birds perform a stunning dance scene.

The costuming is first-class from the very traditional Alice blue dress and the wild Mad Hatter costume to the very cleverly constructed Caterpillar outfit and frightening Jabberwocky.

The make-up, hair, costumes and set design create a feast for the eyes, and combined with the awesome performances by all involved, the Raglan rendition of Alice in Wonderland was elevated to a first-class production. 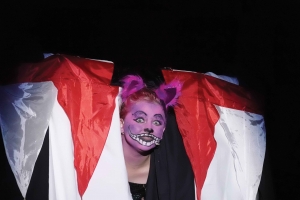 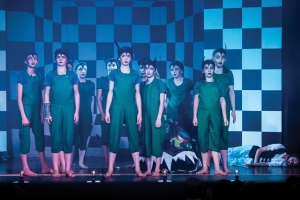 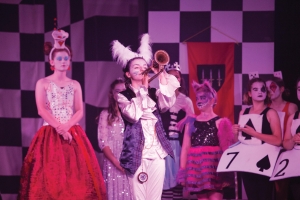 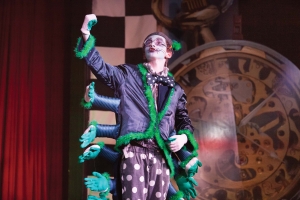 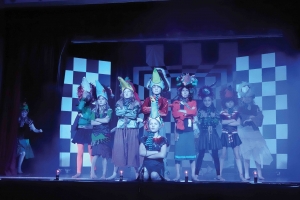 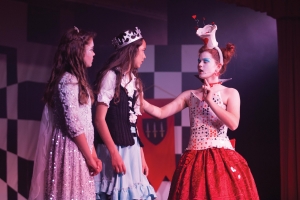 Movers and Shapers: A series on ways Raglan reinvented itself from the
A food-only night market – modelled along similar lines to those overseas
With Raglan Community Radio celebrating their 25th birthday this year, the Chronicle
A special play by the Whaingaroa children enrolled in home school, Dragon’s
From Blue River Baby, a band well known for their epic energy,
Go to Top