It would be a disservice to the timeline of Raglan’s surf history to move on without telling a bit more about Mike Court, also known as “Courty”.

His name has been brought up since the very first conversation I had about this surf column. Crowie Sn. and I had a sit down with him, giving me a chance to finally put a face with the name.

Courty started surfing in 1959, “because it was the new thing back then,” he said, responding to Crowie’s question about why he started surfing and why he came out to Raglan. His first board was actually made by Peter Miller1, another one of the Original’s we’ve since highlighted.

Within two minutes I had learned about Courty’s start with surfing, as well as his time before surfing. Mike Court was a swimmer–a National Freestyle Champion swimmer, to be exact. He remembers coming out to Raglan with Don McCloud to check out Ngarunui Beach as a possible spot for a Surf Lifesaving Club before they started surfing out here. As a swimmer, he was already comfortable in the water, so he was automatically drawn to the idea of riding the waves. 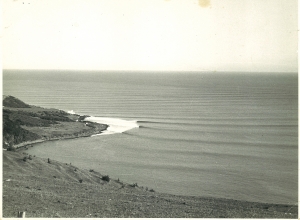 Around 1962-1963 Courty started Surfing Gear, a small shop on the corner of Wellington and Grey Street in Hamilton. Selling boards and doing ding repairs. “No one in New Zealand was doing surfboard repairs back then,” so he became the first. Even though he didn’t have a fibreglass background, he learned as he went, which seems to be the trend.

It was around this same time that Mike Court and the other Originals started The [Hamilton] Point Boardrider’s Club, which is still active today as The Raglan Point Boardriders Club. The boys found an old shack in Hamilton and moved it out to Manu Bay, around the same time the boat ramp was put in [1963]. It was the official clubhouse of The Point Boardriders Club. They’d lock their boards inside and jump out the window. Sometimes they’d sleep at the top of the Bay to keep an eye on the waves and the clubhouse. After a few years the clubhouse was overrun with rats, so Courty went out and burned it to the ground. And that was that. 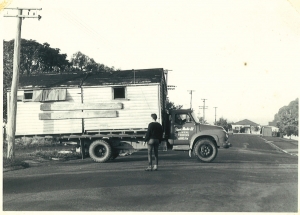 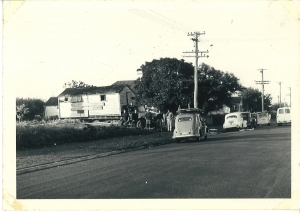 Ten-minutes into our conversation, PC, wandered by the table and the boys invited him to sit down. PC used to work for Courty back in the day fixing dings. After a few years, he moved on to making boards with Matt Holl in the old dairy factory down by the Wharf, another one of the first factories in Raglan. Courty also worked alongside Rodger Land, who had Land Custom Surfboards in the early 60’s in Hamilton. Eventually, Don Wilson worked under Rodger for a few years, and that’s the chain of events that led to the start of Wilson Surfboards in Raglan2.

As things carried on, new names and more stories came pouring out, and I slowly began to gather that Mike Court not only helped to pave the way for surfing in Raglan, but through New Zealand and beyond. He was the first to secure the Billabong Franchise in New Zealand, and spent years taking Billabong around the country and throughout the South Pacific.

The highlight of our conversation was Courty’s old red photo album he pulled out of his car. Cover to cover packed full of images of Manu Bay, surf shops, Point Board Rider events and more. Each one holding its own story, triggering a flood of memories of a time that once was.