The rise of surfing in New Zealand and the lack of surfboard shops at the time, meant surfers were left to their own devices when it came to making boards–forced to hone the skills for their newfound passion in their own backyards. Replicating boards brought over from Australia, Hawaii and California, teaching themselves from blueprints in International Surf magazines and books.

Aside from Peter Miller and a few others, one of the first on the scene was Mike Court in the early ‘60s. Making boards out of old refrigerator packing foam, which they shaped with cheese scrapers. Mike was also the first to open up shop doing ding repairs around 1962, because no one else in the country was doing them. 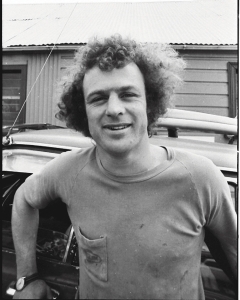 Don Wilson came along a few years later, getting his start by building boards for himself. A builder by trade, crafting a surfboard seem to come naturally to him. He worked as a shaper in the late ‘60s and eventually started his own surf shop around 1970. Don moved his shop to Raglan in 1973 where he established the first surf shop in Raglan, Wilson Surfboards.

Wilson Surfboards was first located where the current INDI’s is. Don had teamed up with G Crowhurst (Crowie) and Kevin McKell, a pair whose influence inspired the shape and designs of many of the boards the team was producing.

In 1975 they moved to the top of Bow Street where the current Bow Street Gallery is. Wilson Surfboards operated for the next 10 years from there. 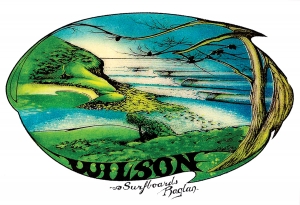 There was a mini factory in the back with the shop in front. Don reckons they were making five custom boards a week throughout the year, ten boards a week through the summer. He even spent some time making the occasional windsurfer. (Don and Mike Court were the first to make windsurfers in NZ, and windsurfing in NZ first took place in Raglan.)

“The innovations and inspirations for our boards were influenced by all different people, some of who are still around Raglan today,” Don said in a recent phone conversation. “It was a learning program for everyone.”

Boys would come in the shop from school with board plans they had drawn up in class and they would get to work. One design that has stuck with him was an offset board, with the rail on one side bigger than the other. “…made it better for driving off the bottom.”

Don would write letters to friends in Australia to get their input on the work he was doing and wait for their feedback about what was being created over there.

When Mark Richards rolled through Raglan with a twin-fin under 6’, Don’s designs changed again. He recalls being out in the surf with dozens of Australian’s and American’s at the time [most of who had made their way to NZ to avoid the draft and got hooked on the surf.] It was an era of ever-changing shapes and sizes, in an attempt to get that perfect ride.

In those days, a 4-ounce glass seemed nice and light and leg ropes were simply being tied to a hole through the fin. The current leg rope design came about in the mid-‘70s, a nylon rope attached to the surfboard, designed in Raglan by Peter Wright. The urethane design was modelled after Peter’s design, and would later be patented by an Australian in 1977.

The evolution of surf in Raglan does not surprise Don. “After Endless Summer, we all knew Raglan was going to be famous.”

Raglan is now home to a buzzing community of shapers. A collective, ran out of mini factories, garages and backyards. Independently dependent on one thing, the surf. And although the quality of the materials has changed over the years and designs have progressed, the passion remains the same.