The fight to prevent the sale of the Raglan Club property has been taken to the community.

Andreas Broring, who has been a Club member for more than 30 years, has appealed to the Raglan Community Board to step in regarding a possible sale and presented his own plans for a proposed development at the site.

A special meeting is being held at the Bow St premises on Sunday, August 27, to discuss the fate of the cash-strapped Club, which made a loss of $117,000 in the last financial year.

The sale of the premises is on the agenda and options regarding possible relocation.

He said the new development could be a supermarket or “something else”.

“We could end up with a McDonald’s and Subway. We have no influence over what would go in.”

He told the community board that he wanted to raise awareness that “something will come, stall the whole process so that something can be done about it”.

He requested that the board should have a representative at the special meeting, and urged the community, many who are Club members, to take his development proposal for “Raglan Central” on board rather than sell out to the unknown.

The proposal that Andreas presented to the community board was for a development of seven two-storey shops – office space upstairs, retail below – along the road front of the Club premises and the side parking area. The existing parking area near the back of the Club would remain.

He suggested that Raglan residents could also invest in the project, which would be built with the Raglan Naturally plan in mind, and it would generate an income for the Club.

“It would be nice if the township had a say in what would be developed there.”

He said the shops could be leased to businesses that were not in competition with other shops in Raglan, and at a rent that was 20 per cent cheaper than the average rates in Raglan.

Andreas said his plans had been seen by the executive and he was told he had two weeks to give exact building costs and provide details on all the shops that would be let.

“The current committee of the Club is not forthcoming in looking at other options.”

He said he and a business partner had previously offered to buy the property for $4.5 million or the land on the road front for $1m as a way to get the Club out of financial debt but they weren’t considered.

A notice was sent out to Club members last week notifying them of the special meeting.

In it, president Colin Sullivan says the sale of the premises is the best option, and the “recommended proposal” sees the Club continuing to use the building for up to two years at minimal cost.

The other proposals presented in the notice relate to relocation in the event of a sale, either to the Bowling Club, which the Club already owns, or to “purchase one of a couple of options available”.

The decision to sell the Club will be made by the members in a vote.

Community board chairman Bob McLeod said he would invite Colin to speak about the Club’s proposals at the next meeting. 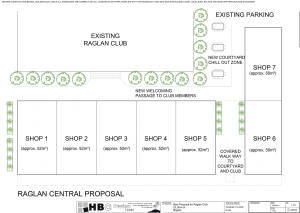 Make sure you are aware of the waste collection dates over the
The new Raglan Community Board was officially sworn in on Wednesday, 13
Accidents and emergencies in rural areas can mean help is often hours
Newly built Raglan homes have been picking up a fair swag of
If you need affordable housing, or have any ideas about what you
Go to Top