Sushi wraps or cones, mini muffins, popcorn and fruit, all neatly served up in a compostable “clamshell” container – the humble tuck shop has come a long way if the fare on the lunch order menu at Raglan Area School today is any indication.

New canteen operator Maree Harris acknowledges the modern tuck shop is a far cry from her own school days when she might have tucked into a deep-fried lasagne topper or a slab of frozen cheesecake. And while there will still be sausage rolls in the pie-warmer, as of old, some vegies and lentils will be sneaked into her savoury mince mix.

There’ll be no pies as such, she says, but the green pastizzi seen on the RAS lunchbox page of Facebook “appears to be a winner”.  It’s a puff pastry, vegetarian option – based on a recipe that originates from Malta – with a cheesy, eggy, spinach centre. 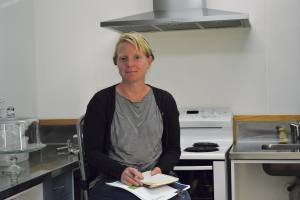 As the new contractor, Maree’s been busy trialling various recipes at her Bayview Road home during the school holidays with five-year-old son Dizzy and daughter Lola, nearly three, her keen guinea pigs.

And today, Thursday – with the re-opening of the tuck shop after a $5000 upgrade that includes a new oven and extractor fan – she was all good to go.

While she hopes to introduce some more conventional fare along the way, like sandwiches and filled rolls, Maree will also be selling her own unique Dizzyblocks – iceblocks made from mainly fruit – which retail at The Shack, Raglan’s monthly creative market and at the Whatawhata farm shop.

Her background is in hospitality and with partner Liam Caulden-Lavers – a former chef but now a teacher at the school – taking on the canteen contract seemed like a “really convenient” thing to do as a family.

“I’m trying to find somewhere in the middle between pre-packaged food – which is very cost-effective and convenient – and healthier options,” she says.

At the same time she acknowledges buying lunch is still a treat for kids so the choices need to be appealing. It’s about mixing classic favourites with the likes of sushi, for instance, to get the nutrition that complements learning.

Area school principal Malcolm Cox told the Chronicle it has been quite a challenge to get the tuck shop of old fully compliant with new health and safety standards.

“It’s a whole different set-up,” he revealed of recent regulations which mean a licence is now needed to operate a school canteen as a small business.  “It was not an easy transition.”

But it’s exciting to be “up to speed” at last, he said, having run school lunch orders from the hall kitchen most of the year courtesy of parent Margaret Dillon and her helpers.