Piecing together the puzzle of Raglan’s surf history has uncovered names and stories that some thought were all but lost. Each week of searching has brought on new names and new adventures, some have added to the story, some have given it a new twist.

Fact checking isn’t exactly an easy task, so as these stories unravel we have to backtrack and give credit where credit is due–this one involves the historic day Manu Bay, “The Point”, was first surfed. Thanks to the diligent diary keeping of Peter Miller’s then girlfriend Kaye (who eventually became his wife), the story is short and sweet, and goes a little something like this: 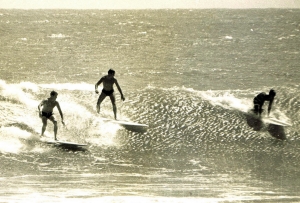 “I had surfed Whale Bay a few times from as early as 1958 using my surf ski. But on this day with a new ten foot Malibu I had just built strapped on the car, I was attracted to the large waves forming around a point on a headland, running off into the bay. I decided to stop and walk down the hill and give it a go.” – Peter Miller

Peter had driven out from Hamilton with Kaye. She decided to stay in the car and write in her diary, while Peter took those historic footsteps down the hill and off into The Point. Peter notes that he never read Kaye’s diary, but she did confirm the date for him…

After riding The Point, Peter rang [fellow ‘Original’] Chas Lake over at the Mount with one message, “Get here.”

Back then, they were riding 16-foot paddle boards, not so ideal for The Point. It would be a least a year from Peter’s first phone call to Chas before they made it across to try out his newly discovered surfing spot. But once they experienced it for themselves, Peter would ring the Mount Surf Club from Petchell’s Bakery in Raglan on the big days, and they would make an 80-mile mad dash across the Kaimai’s.

Chas recalls the first time he came across from the Mount with Peter, Jim Mowtell “Mo”, the late Ces Marsh and Ces’ son.

“It was so big it closed out right across the bay. Peter and Ces headed for the horizon, paddling through some huge broken waves. Ces’ son was crying, convinced that he would never see his dad again! The boys caught waves in after the huge set had subsided… In my years of visiting Raglan, I have never seen a set like it.” – Chas Lake 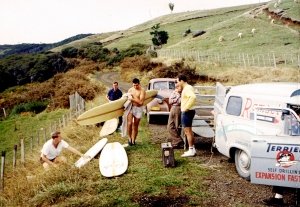 In December 1957, Peter Miller made the first ‘short’ surfboard–a 10-foot Malibu board, that would go on to be accepted as the first board built in New Zealand.

It had rounded solid pine rails with a shaped 12-inch wooden skeg. The fin was fixed to the board using resin impregnated cloth (which he later found out was also known as fibreglass). The nose was rounded with a slight uplift/rocker. The overall length was 10-feet by 24-inches wide and weighed 32kg/70lbs.

The modern lightweight foam surfboard didn’t appear in New Zealand until 1958 when two American’s, Bing Copeland and Rick Stoner, turned up at a Surf Lifesaving meeting.

These boards would trigger the evolution of surfboard shaping in Raglan and the rest of New Zealand.